EuraTechnologies Raised €24 Million And To Start Expansion In Eastern Europe

French incubator and accelerator EuraTechnologies has raised €24 million in funding.

In line with its main mission of helping create jobs, the incubator will create 3,000 additional permanent jobs on its sites by 2027, through the long-term success of the startups it supports and the companies in its ecosystem, – Nicolas Brien, chairman of the board of EuraTechnologies. 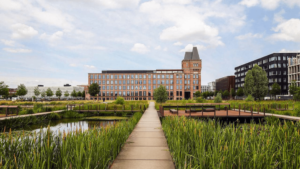