According to the National Bank of Ukraine, the export volume of computer services for the first half of 2022 is 3.74 billion dollars, which is 23% more than for the same period of the previous year.

The national IT industry still retains significant potential for growth. However, if critically important issues are not resolved in the coming weeks, we will presumably see a regression in the next reporting periods already, – Konstantin Vasyuk, Executive Director of the Association. 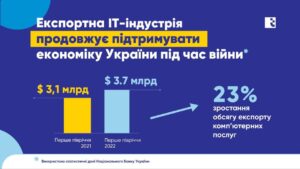