Ukrainian and European startups raised $5.5 million during the Genesis and Meta StartUp Academy

Ukrainian and European startups raised $5.5 million for business development during the Genesis and Meta StartUp Academy

During the recent StartUp Academy 2.0, an educational program held by Genesis together with Meta, fifty participating startups secured funds of more than $5.5 million for business development. 25 of these participants were Ukrainian startups, which received $2.7 million of the total investments. Contributions came from the academy’s partners: Amazon Web Services (AWS), Notion, Sensor Tower, Zendesk, Ukrainian companies Legal Nodes and Awesomic, and others.

The raised funds were in the form of financial backing in credits, free access to business services, and mentoring sessions. Meanwhile, Meta gave all participating startups access to Blueprint certification, and AWS gave students credits to cover the company’s cloud services costs of up to $100,000 for each startup. Awesomic, Sensor Tower, Zendesk, and Сustomer.io provided free access to their products for one month to a year. The startup Legal Nodes held free sessions with the company’s experts and offered a free subscription to its legal platform.

Central and Eastern Europe is a region of talented and persistent entrepreneurs who have been underestimated by venture investors for a long time. That’s why we consider it our mission as a company to help them grow, raise funds, and create products that will improve the lives of millions of people. Our goal is to find budding entrepreneurs, give them tools, and share knowledge and contacts so that they can move the industry forward in the future. This applies to companies outside the Genesis ecosystem as well because we are interested in the development of the market in general, – says Genesis COO Artem Kopanev.

Participants raised financial backing for business development while studying at StartUp Academy 2.0, a free international program for top managers and founders of technology businesses, created by the Ukrainian co-founding IT company Genesis together with Meta, supported by partners and investment funds. More than 3,000 candidates from 30 countries submitted applications; of these applicants, 50 were chosen to participate in the program, half of which were Ukrainian companies.

Every year, technology companies from Central and Eastern Europe replenish the lists of unicorns. Even in difficult times for the global economy, they continue to attract investments. Meta supports the development of innovative companies. Therefore, together with Genesis, we implemented a StartUp Academy and plan to participate in similar initiatives in the future to contribute to the growth of the Eastern European technology sector with the help of knowledge and resources, – states Stanislav Birov, Meta’s Client Partner in the region of Central and Eastern Europe.

The program lasted three months and taught startup CEOs about the various stages of creating, managing, and scaling a technology business. The academy created a unique space for networking and exchanging knowledge and experience, including mentoring sessions, meetups with CEOs of global businesses, 1:1 consultations with partners, and peer-to-peer training. The program ended with a Pitch Day, during which selected participants presented projects to investors from 12 leading European and American venture capital funds, among them Flyer One Ventures, Horizon Capital, Catalyst Romania, TA Ventures, and ICU Ventures.

Excellent organization from the beginning; rich lectures with a non-standard approach and insights from the “inner kitchen” of a startup builder. Mentors come to sessions prepared with apt questions and hypotheses about your project. [There was a] Pitch Day with a cool lineup in the jury. All of this helped us to build a strategy and take the first steps towards the desired results, – Anzhelika Romanenko, participant of StartUp Academy 2.0 and founder of the New Zealand startup Tamaranga, shares her impressions.

The dates of the third iteration of “Genesis StartUp Academy together with Meta” will be announced in early 2023. Startups can already submit their applications for participation via the registration page. 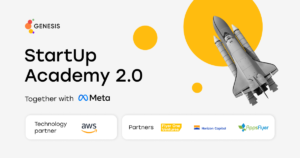