Within the International Conference Standing With the Ukrainian People held in Paris today the Prime Minister of Ukraine Denys Shmyhal with Minister of Economy, Finance and Industrial and Digital Sovereignty of the French Republic Bruno Le Maire signed Long-term Roadmap between the Government of Ukraine and the Government of France on the launch of a program to support the digital industry of Ukraine.

Earlier, following the results of an International Standing with the Ukrainian People Conference, about 1 billion euros were attracted from foreign partners, half of which are grants.

Two weeks ago director of TechUkraine Nataly Veremeeva arrived for a working visit to France to explore the opportunities of closer cooperation of our two countries and build bridges with ecosystem players. 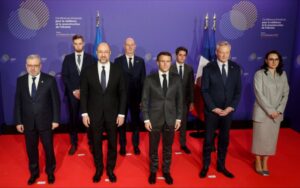