Thanks to the partner Western NIS Enterprise Fund, which sponsored the Christmas Eve celebration, the event was held on a larger scale with an additional charity mission this year.

“Ukrainian Tech night supported by WNISEF” became the platform of unity and support for Ukraine, joined by members of the Trade Mission, partners, and colleagues, as well as representatives of the European Pavilion, colleagues from the EIC and the European Commission, investors from Silicon Valley and Ukrainian entrepreneurs which are living and scaling tech projects in the USA.

WNISEF is funding innovative, high-impact, reform focused programs and aims to support Ukraine and Moldova at this critical period by developing sound economic policy and leadership. And we were glad to support Ukrainian Tech night, to give an opportunity for Ukrainian entrepreneurs to meet local and international partners in this unofficial way, to let them establish new ties and partnerships, – Vitaliy Bigday, WNISEF. 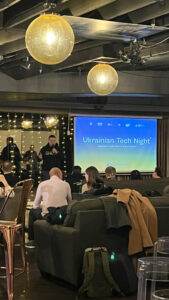 At the beginning of the official part, co-organizers of the Trade Mission, Dmytro Kuzmenko, CEO of UVCA, Andriy Kolodyuk, Chairman of the Supervisory Board of UVCA, and Karina Kudryavtseva, manager of the Ukrainian Startup Fund thanked all partners for huge support to make this mission possible, expressed their support and gratitude to the participants of the delegation.

Dmytro Kuzmenko, CEO of UVCA: “We are proud to represent Ukrainian tech innovations at CES2023 during this challenging time of war. Thanks to powerful support by our partners from the Western NIS Enterprise Fund, USAID Competitive Economy Program in Ukraine (USAID CEP), Ukrainian Startup Fund, Global Innovation through Science and Technology, Ministry of Digital Transformation of Ukraine, TechUkraine. I want to emphasize that USAID CEP has been supporting the development of the Ukrainian tech sector since 2019, specifically via 20+ programs to help hundreds of technology startups via several startup programs, including a US incubator in Ukraine, grants, trade missions, weekly acceleration bootcamps as well as capacity building of regional IT clusters and national IT associations and many others. And during these difficult times, USAID CEP is the most important and most reliable partner for Ukrainian SME’s. Highly appreciate all joint efforts for making it happen!” 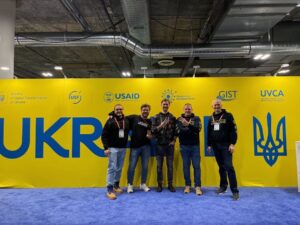 After that, founders of Ukrainian startups participating in Trade Mission made a short round of elevator pitching for the present audience. Every pitch was finished with the round of applause.

In conclusion of the official part, Oleksandr Neskin, CTO Petcube, represented to the audience the initiative “Spend with Ukraine,” founded at the beginning of a full-scale invasion for boosting Ukrainian tech and creative economy with conscious purchase decisions. It curates a web platform with a list of 200+ Ukrainian-rooted businesses. Together with the Office of the President of Ukraine, the team launched a campaign with the SWU gift kits to present celebrities who visit to support Ukraine, like Bono, Ben Stiller, Sean Penn, Jessica Chastain, and others. 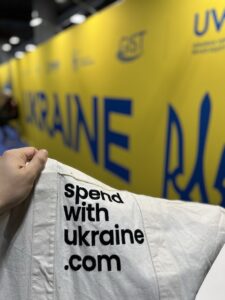 After that, the guests participated in the charity auctions with featured items by “Spend with Ukraine”:

All money from the auction will be transferred to the KOLO charity fund to support our Army and defenders. 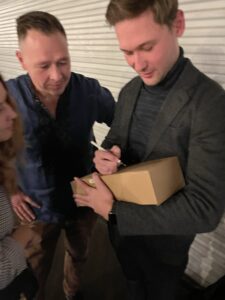 The Christmas evening ended with active networking to the sounds of modern Ukrainian music. The event’s guests were delighted and expressed their gratitude and support.

“We are all Ukrainians!” – said one of our European guests at the end of the event. 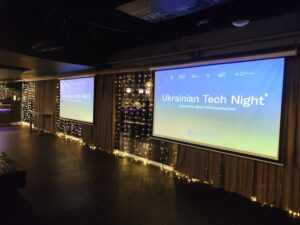