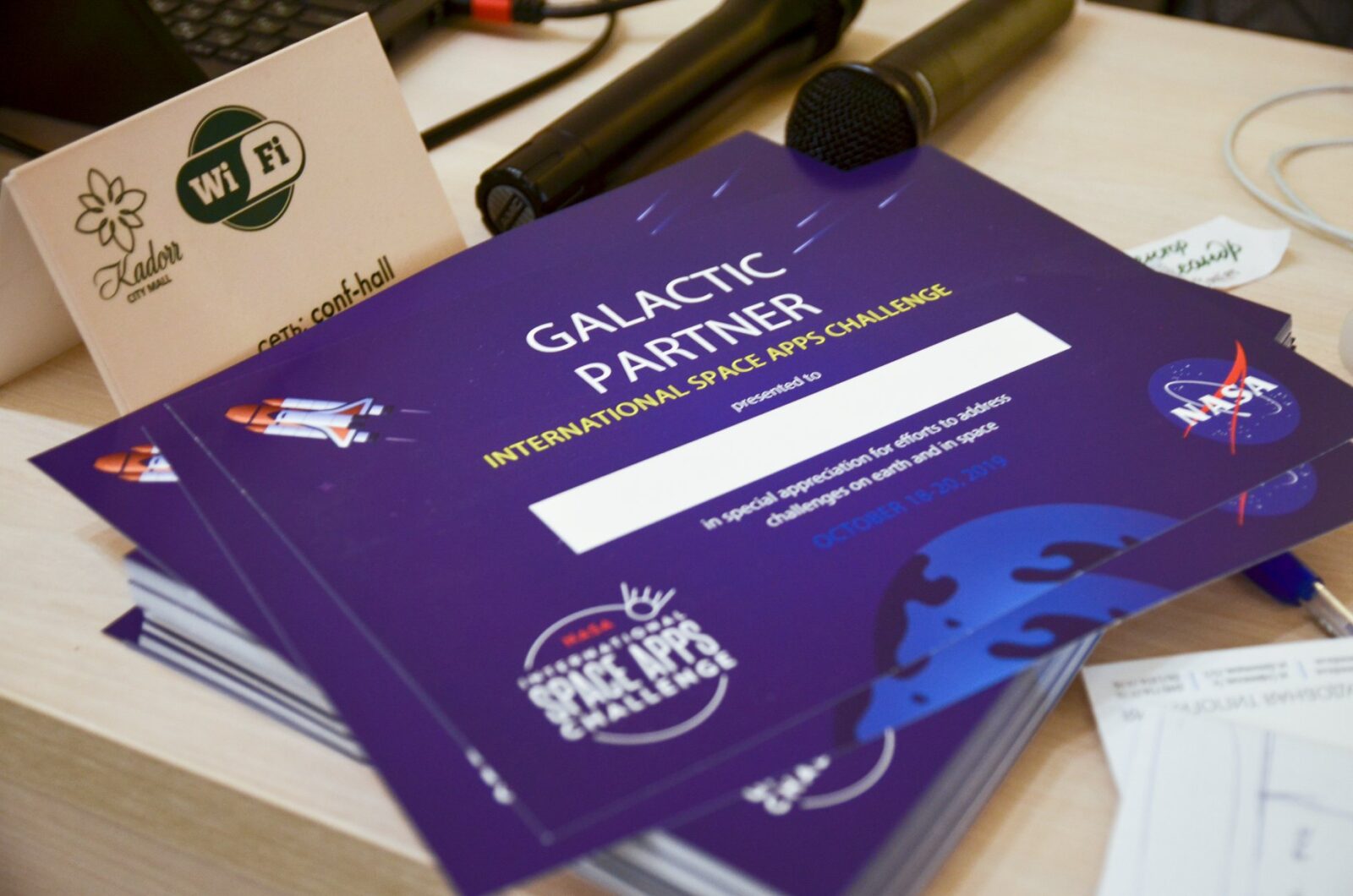 I met Olha in 2018. We were about to host our second NASA Space Apps event in Odesa, and she was one of 60 people who came to the bootcamp that Sunday morning. Olha isn’t your typical space geek. She isn’t 18 (average age for those who participate), she isn’t a coder or an engineer (in fact, she worked as an HR manager), and most importantly she is a woman. Ever since the 1960’s the space industry is heavily male dominated, and we honestly make a small celebration every time there’s a woman who is willing to be a part of it. Anyway, back to Olha: she came to the bootcamp without a team or an idea of the project. By the end of the day she found her teammates – a software engineer, and an interface designer, they picked their challenge, and by the end of the week, they delivered an MVP: an application for those threatened by a natural disaster.

In 2019 I was going to invite Olha to Space Apps again, but she was in the middle of her relocation to Valencia, Spain. She recorded this video for those who want to participate in their first hackathon and supported us remotely. We were going to invite her again in 2020 anyway, but with COVID restrictions the event became virtual first. For Olha, it wasn’t a matter of logistics anymore: she was able to create her next space tech project from her own home. As a local lead, my mission was to help her find the most promising challenge, so she and her team could deliver an MVP in 48 hours.

For those who never heard of the Space Apps hackathon: this is an annual international event hosted in hundreds of places from Egypt to Australia, involving tens of thousands of people to collaborate, create, and have fun with space technology, and data. The hackathon was founded in 2012 as a matter to support the NASA innovation incubator program. All those years, NASA came up with the most interesting topics, not just limited to space exploration: the challenges refer to the Earth’s oceans and cryosphere, disaster management (volcanoes, tornadoes, wildfires and so on), promotion of STEM education, and, recently, response to the global pandemic. In fact, there was a separate COVID-19 event that started collaboration between NASA, JAXA, CSA, and other stakeholders in providing space data for the participants to play with.

The hackathon is free for anyone to participate virtually or with the local lead of their choice. To start their first space tech project, one is supposed to register, pick their challenge, invite their team, and pitch the solution by the end of the 48-hours event. Each location nominates two winners, and after a few weeks, the global organizers pick their top 6. In the last few years, the winning teams got an invitation to visit the rocket launch viewpoint on Cape Canaveral, USA.

I’ve been a local lead for the Space Apps community in Odesa since 2016. Each year we hosted a bootcamp for the first-timers who need help picking their challenge and planning their work and a hackathon with 100+ participants. This year I didn’t want to add another 48 hours to my already excessive screen time log, so I decided to concentrate on mentoring specific teams, and Olha’s was one of them. She did meet my (over)expectations and collected an all-female team of 6 people – designers, thinkers, data scientists, and project managers.

At first, we wanted to take on the Spot That Fire V3.0. This challenge was around for 3 years, but apparently, NASA wasn’t satisfied with the solutions provided: the teams were supposed to develop an application to detect, predict, and assess the economic impacts from wildfires by leveraging high-frequency data from a new generation of geostationary satellites, data from polar-orbiting environmental satellites, and other open-source datasets. After elaborating on the idea, the team (named Girls on Fire, no less) decided to go with the Invent Your Own Challenge category and emphasize our local issues with the wildfires. That way the girls were able to concentrate on Ukrainian specifics and create a project that would later have a chance to become a real startup.

To mentor the team, I invited the space data specialist and NASA Datanauts program alumni, Tamara Koliada – earlier I invited her to join one of my workshops for the Ukrainian State Space Agency (Космічний воркшоп: як працює data science). Tamara’s help was essential to the team’s data scientists who never dealt with NASA and ESA datasets before.

I also became a mentor myself, telling the girls everything I know about wildfire detection in Ukraine (one of my previous blog entries is dedicated to that: ).

It is an unspoken rule of the hackathons: to come unprepared. Of course, there are teams who bring an almost ready prototype to the final pitches, but I consider that unfair to those who really try and build something new in 48 hours. The Girls On Fire was unprepared in a good way. However, team composition and chemistry allowed them to work on their project in the most effective way possible. There are two keys to working remotely and under pressure:

From her Space Apps experience, Olha was aware that the team has to simplify the solution as much as possible to get there in time. From the very beginning, each of her teammates received her task list: one was supposed to work with the mentors, one was supposed to prepare the pitch, and the others had their pieces of work planned meticulously. This approach allowed the girls to deliver everything they planned, and then some.

The Space Apps has several judging criteria. The teams get rated by creativity, innovativeness, relevance, pitch quality, and sustainability of the project. In my opinion, sustainability is the most important criteria: each team has to ask themselves, whether or not they want to work on their project in the future, and if they do, what kind of resources do they need to succeed.

With Girls On Fire, sustainability was there from the start. They knew exactly why, where, and when can their project be useful for fighting the wildfires in Ukraine. They knew who and how could implement the solution into their workflow. And most importantly, they came up with a monetization strategy, so the project would become self-sufficient. Later in December the girls will meet again and make a plan for the future of their startup.

If you would like to know more about the WTFire project by Girls On Fire team, please visit their page or click through the demo.

And if this example has inspired you to try and build something of your own, join the global Space Apps community, and participate in the next hackathon on October 2-3, 2021. Starting your first space tech project is definitely not rocket science, and if you need a mentor, I’m always there for you – just tell me about your ideas in an e-mail. 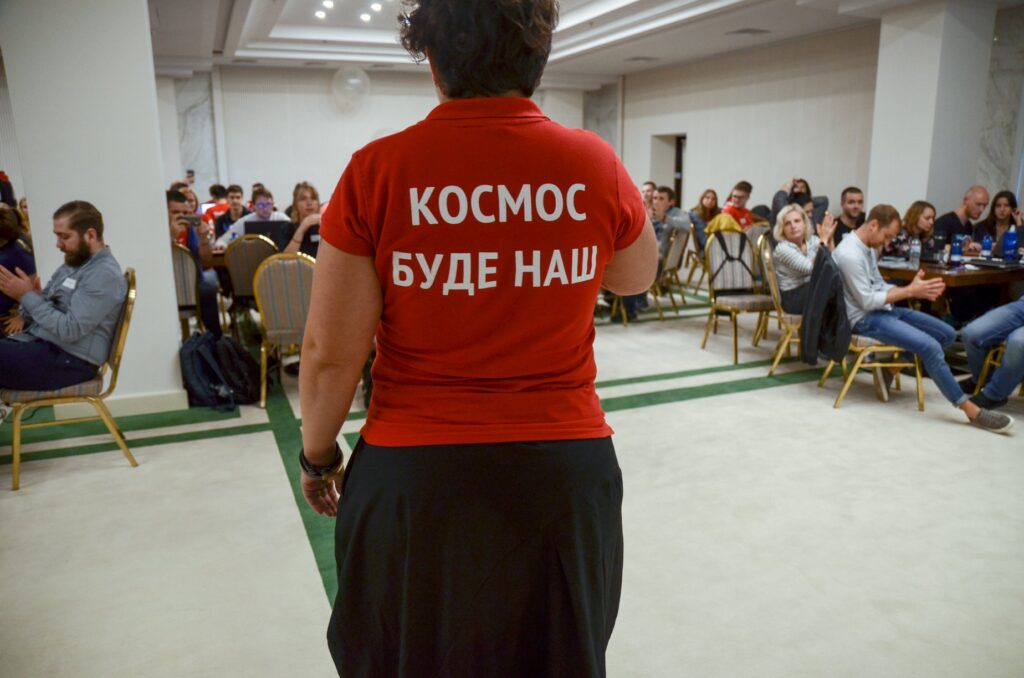