Elomia: How are the startups doing? 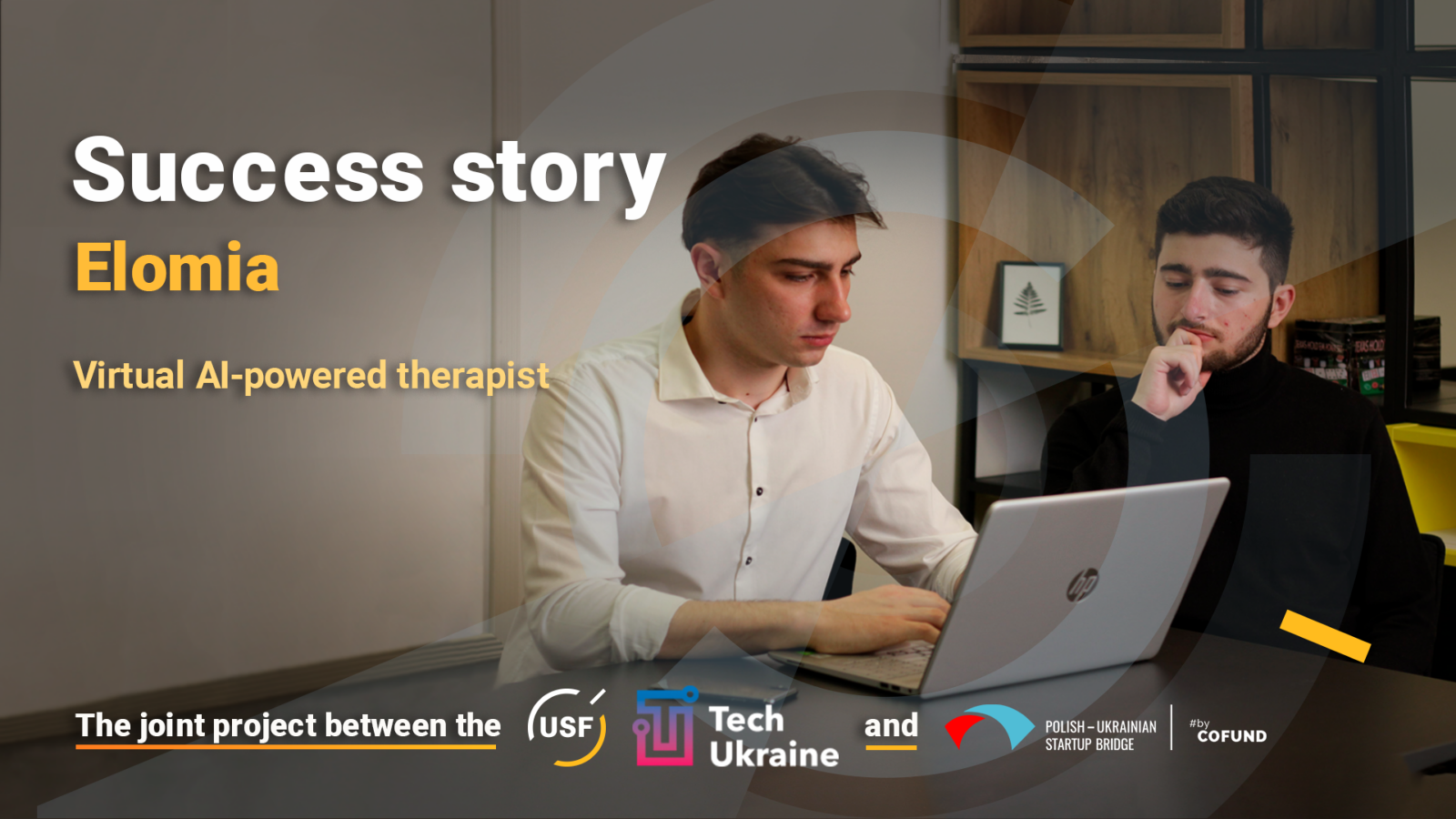 Meet Elomia that raised a $25000 pre-seed round for development – let’s discover what the project is about, where it is going to scale,  what kind of KPIs are on the agenda.

Could you tell us a bit more about yourself? What did you do before Elomia?

My name is Taras, I am the founder and CEO of the startup Elomia. Before that, I ran another startup that was solving the same problem. It was created to help all those who are afraid of contacting a psychologist and suffer from it.

Out of all people who need psychological help, only 4 percent seek support from this type of specialist. For me, this data is more than just a statistic – it’s something personal. When I was 15, I had my first thought about committing suicide. By the end of my second year of university, I was thinking about it on a daily basis. There was no reason for it, and objectively my life was going quite well.

I grew up in a village where stigma and shame are particularly strong. I was afraid to go to a psychologist, but that decision changed my life. So I started thinking about what I could do to help others who had the same problem as me.

Do you remember when you first thought of Elomia? What was your vision of the project?

The idea for a previous startup was to create a marketplace for psychological services where contacting a psychologist doesn’t mean something terrible. The idea didn’t work out, but the problem I wanted to solve still existed.

I wondered how I could help people who are suffering but no one knows about it. Elomia was the solution to the problem. I thought of Elomia as something that has machine qualities, human ones, and non-human ones too. I mean, for example, the inability to laugh, to judge, to disclose problems to others, with the ability to listen and help, to do all this 24/7 with total focus and reliable memory. 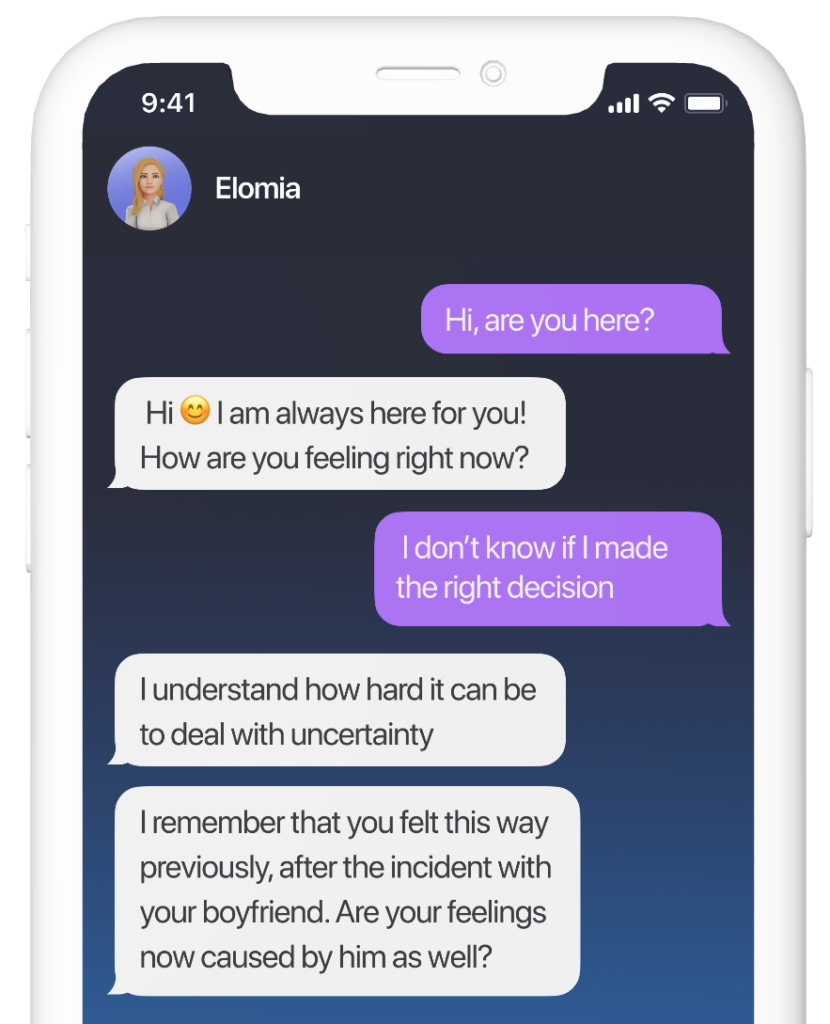 I wrote a small program that generated words with a nice sound from 0 and showed me the ones with which the .com domain was free.

My main concern was not being able to combine all those features I mentioned and artificial intelligence. This is a very ambitious task. Perhaps even too ambitious, but most importantly – we are trying to achieve our goals step by step and have already made significant progress.

Elomia differs from other chatbots mainly because it does not function according to scripts or databases. Each message’s response is generated by artificial intelligence from scratch, taking into account the context and emotions conveyed by the specific user.

This is where we see our advantage over other solutions on the market. The functioning of Elomia requires training that is based on thousands of conversations of psychologists with their clients. We have such data.

What is the value of an online conversation – without the ability to see non-verbal messages such as gestures, mimics, or the person’s tone – compared to a face-to-face meeting?

If you look at the efficiency studies from a psychological standpoint – the value is somewhat less than compared to a traditional specialist but high enough to help the user.

When we talk about the users’ comfort, their opinions on this subject vary. For some, this form of communication is unacceptable, while for others it is the only way to share their emotions without fear of being judged by others. It is difficult to be completely honest with a psychotherapist. It is a little easier to open up during video consultations or so-called “walk therapy”. Text communication, on the other hand, provides anonymity and total control over the flow of information – you can delete the entire conversation at any time if something goes wrong or you change your mind. This is very helpful.

People are afraid to share their real experiences with others, so they talk about the weather instead. According to our calculations, which we conducted based on data from the American Psychological Association and WHO (World Health Organization), 96 percent of people who could get in touch with a psychologist, will never contact him. Mainly because of the high cost of such services, but also due to their fears.

Elomia is not a real person, so this fear becomes irrelevant. Plus, a monthly subscription costs 40 times less than a one-month psychologist consulting.

Do you think that “fake psychologist” is something that solves a real problem? Don’t you think Elomia is making it harder for people who should go to a traditional specialist to get to one immediately?

I don’t want to divide the problems between real and not quite. They are all real. However, it often happens that people attribute them to character traits or temperament. All my life I believed that irritability and distrust were traits of my character. Only after they began destroying my life I found out that they were symptoms of borderline personality disorder.

When you know that this is a symptom and not just a character trait – you can then turn to a psychotherapist for help. When people don’t treat it as a serious problem, they start looking for another solution after a few years: like alcohol, drugs, and suicide.

Elomia can help solve many problems, but not all. Each requires various levels of involvement and control by a psychotherapist, and some even need medical treatment. When the engagement and control the app provides are not enough, Elomia lets you know about it and recommends contacting a traditional specialist. 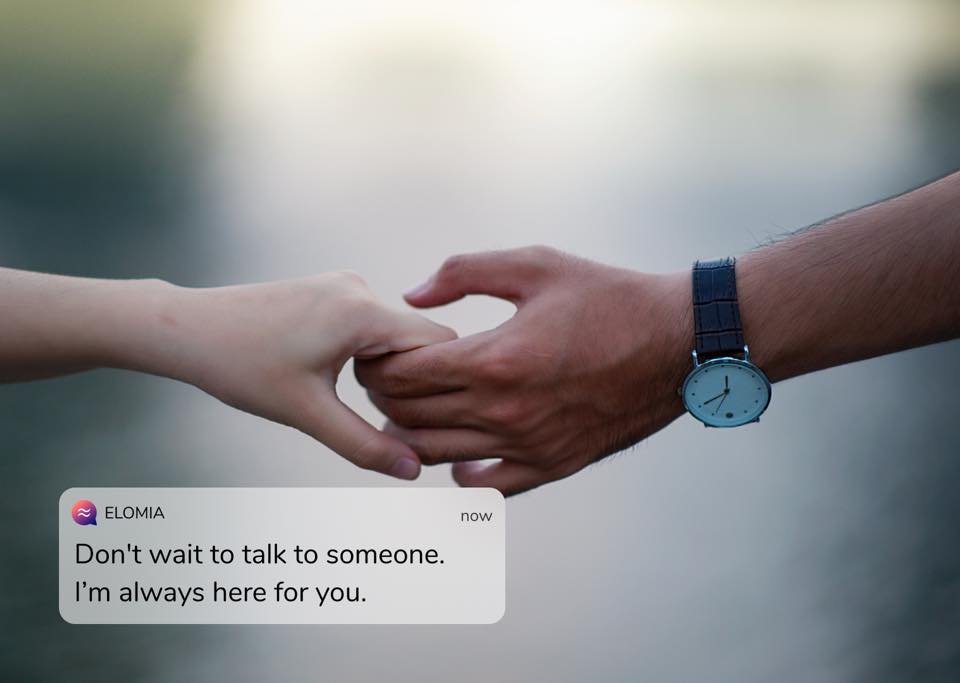 Is there any mistake you have made in the Elomia development process? What lessons have you taken from this experience?

We’ve got one funny story. When we wanted to launch a free trial period, the button that activated that service at some point started offering a purchase instead of a free trial period. The story eventually ended well: users started buying subscriptions, even though we hadn’t planned to offer them so early on.

In general, I don’t like stories about startups being so successful. Most of them fail. In our case, generally, every other decision turns out to be the wrong one. Sometimes it may seem that we don’t know what we are doing. Indeed, we don’t. This can be a bit intimidating, but it’s easier once you understand that no one else knows either. No one has created such a thing yet.

We are learning from our mistakes. The most important thing is to keep going, to keep learning something new and creating something new, thus helping the company grow, and along with that, being able to grow yourself as well.

We spent almost the entire last year in the lab doing research. During that time, Elomia was available as a chatbot on Facebook Messenger, and we had pretty good metrics:

Back then, we had a few dozen users paying for our solution. We are currently working on building a business model and if all goes well, we will look for an investor.

Initial results are good: we acquired our first subscribers through the app, verified CAC (Customer Acquisition Cost), and tested two pricing options – $6 and $12 per month. We got a higher conversion rate with the latter. 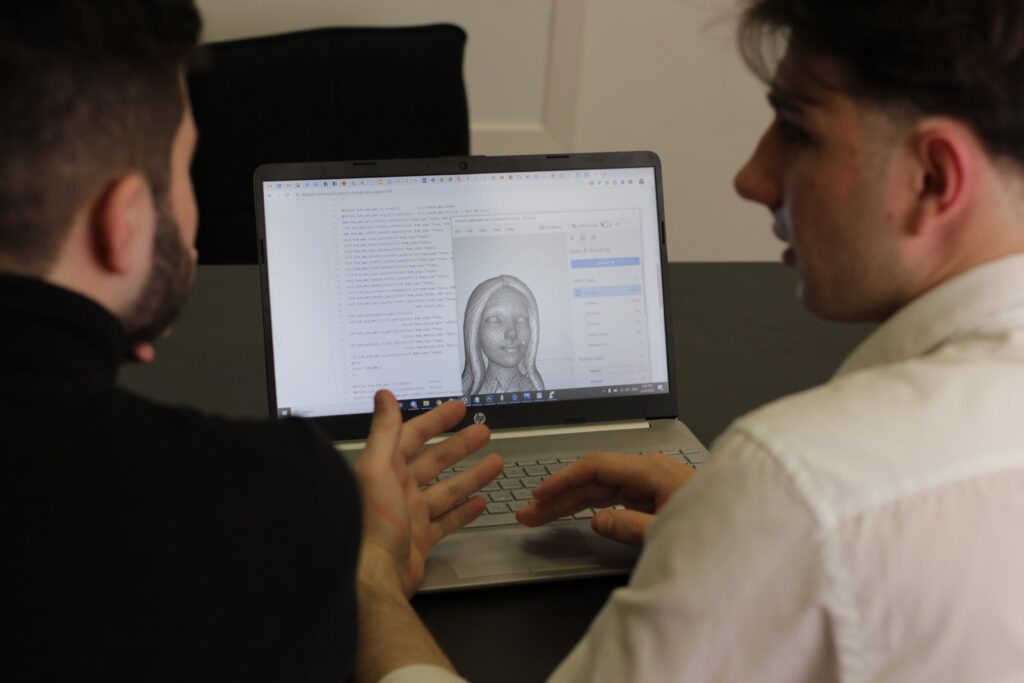 In terms of what everyone can see, we’ve launched the app and started selling, and we’ll be ready to scale soon. From the standpoint of what’s hidden, we’ve made a lot of progress in technology development. When I first spoke with our new AI a month ago, it managed to point out to me within a few messages things that I had never noticed before. When I spoke to it the second time, this happened again. By the third time, artificial intelligence had already made mistakes.

Compared to the summer of 2020, that’s a huge difference, although mistakes still happen. And that’s normal because we’re the first doing something similar and, most importantly, we know how to fix those problems.

This puts us in an interesting position. Imagine: 1 billion people are in need, but there are only 3 companies in the world that offer psychological support via chatbot, which are Woebot, Wysa, and Elomia. Out of these, only Elomia provides communication with the chatbot as if it were a real person – people can text it anything and get a thoughtful response.

Our cooperation with the USF went well. And if we consider that this is a state fund, then it was great. Compared to other government organizations, Ukrainian Startup Fund is probably the most agreeable of them in terms of ease of interaction. It is constantly evolving and I believe that startups will be given even more value with fewer factors that would distract from product development.

As for the Polish-Ukrainian Startup, we were looking for organizations that could support us with their expertise in terms of undertaking a pre-seed round. As a result, within six months we raised over 40 thousand dollars (equity-free funding). The experience we gained during the PUSB project was important for our future success. Together with the team, we had several meetings with investors from Poland that were organized as part of the Kyiv Tech Hub conference. We remain in close contact with them even today. We are ready to raise a seed round soon.

What are your goals for the future?

This will solve many problems:

Our goal is to make this vision of the future a reality.

And finally, what advice would you give to all future entrepreneurs?