IOON: How are the startups doing? 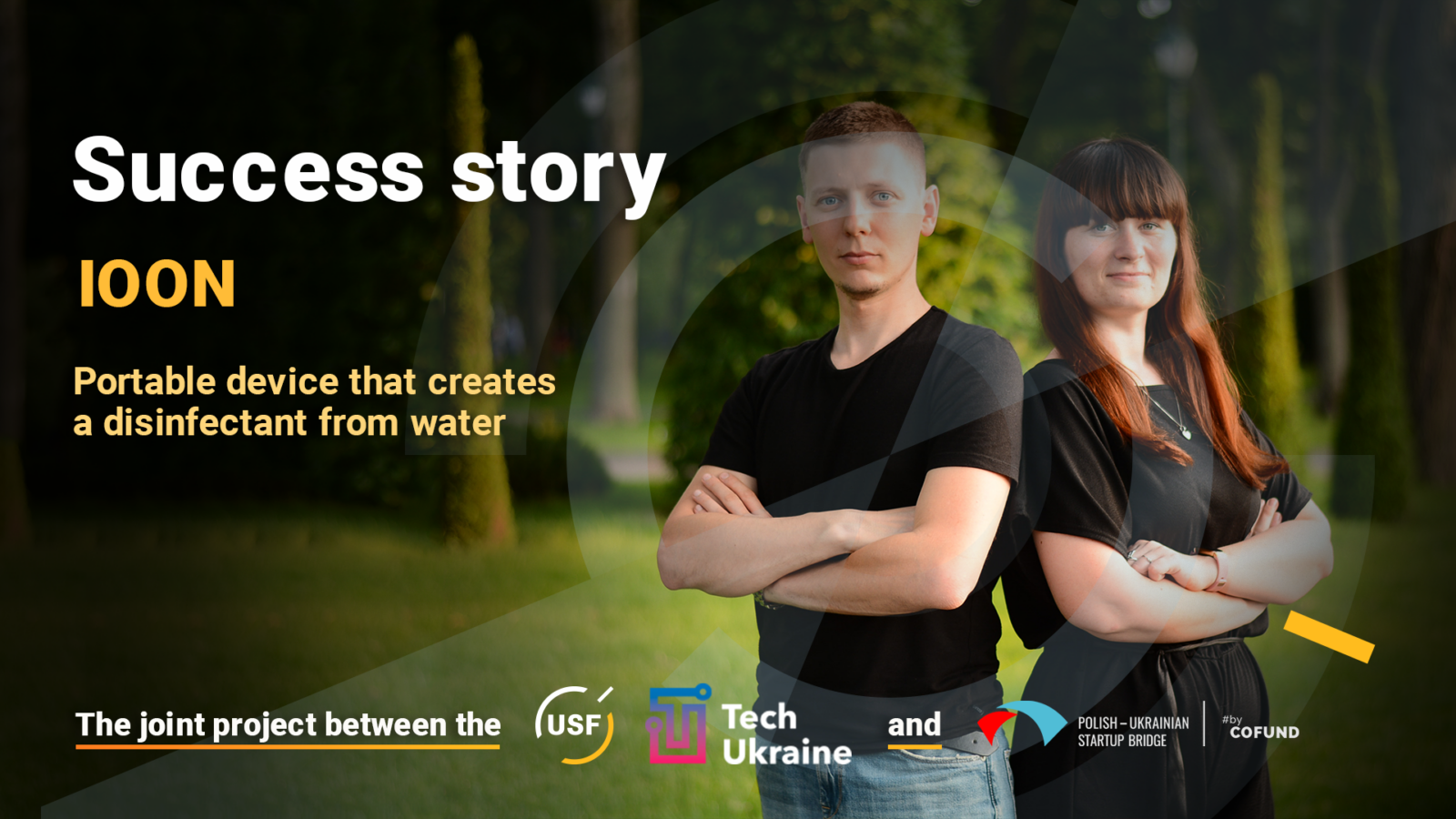 Meet Andrew Manuilov, Co-Founder and CEO of the Ukrainian startup IOON that raised a $25000 pre-seed round for development, got to the final of Kyiv Tech Hub 2020 and won a “wooden” medal, taking fourth place – let’s discover what the project is about, where it is going to scale,  what kind of KPIs are on the agenda.

To start off with, could you briefly tell us your personal story?

It just so happened that we started working on IOON almost three years ago when the global COVID-19 pandemic was unthinkable for most people in the world. We are a team of three scientists – two electrochemists and a Doctor of Pharmacy (Pharm.D.). Previously, we worked on creating water disinfection systems (e.g., swimming pools, fountains). At some point, we realized that while non-chemical disinfection methods can be used in large industrial facilities, disinfectants and personal protective equipment are mainly based on alcohol or chlorine. With all this in mind, we did a so-called “pivot” and decided to focus on checking our theory, testing, and prototyping it. And while most experts will say that you need to start with customer development, I still think that scientific startups should first check “whether such technology exists at all,” at least at a basic level.

Tell us about your startup for those who hear about it for the first time. How does your startup change the industry you work in for the better?

Simply put and understandably for everyone – IOON is a portable device that creates a disinfectant from water. More detailed, IOON is a technology based on the combination of electrochemical principles of water saturation with silver ions and active forms of oxygen. The combination of these components allowed us to achieve effectiveness in the fight against the most common bacteria (Escherichia coli, Staphylococcus aureus, etc.) at 99%. Of course, we also tested the effectiveness of IOON against coronavirus and were able to neutralize the model virus strain on different types of surfaces. Because IOON only needs water for work, it is a worthy alternative to existing disinfectants. With our device, you do not need to apply alcohol, glycerin, dyes, aroma, and my favorite – a mixture of QACs – on your hands (or other parts of your body).

Here’s what makes IOON unique – we’ve implemented regenerative technology to create a disinfectant as part of a reusable device. IOON is very easy to use – just fill it with water, turn it on and spray the selected surface. With a single cartridge, the user can produce up to 3 liters of disinfectant. When the life of the cartridge is over, all you need to do is replace it (no need to buy a new device). 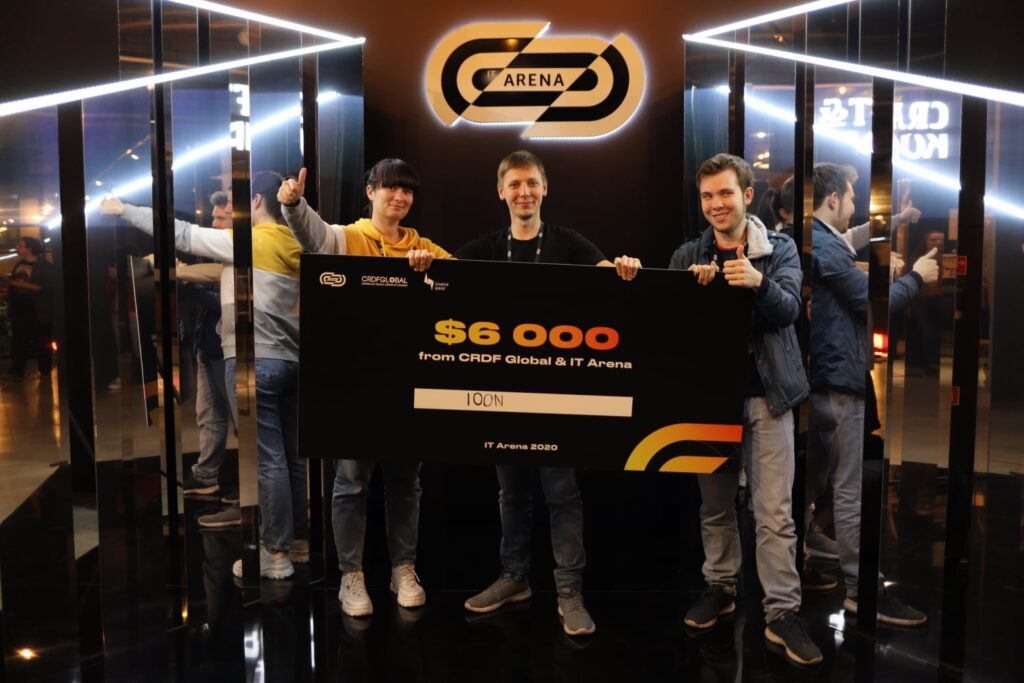 We approached the choice of brand name twice. The first time we chose “Dew Pocket” was when we received a pre-seed grant from the Ukrainian Startup Fund (USF). Selecting this name, we came from the assumption that dew is associated with cleanliness and pocket with mobility. But when we started talking to people, especially foreigners (who are our primary target audience), we realized that “Dew Pocket” sounds strange to them, to put it mildly.

When choosing the second name, we wanted it to be simple, short, and have at least some kind of connection with the product or technology. Since IOON is based on electrochemistry and ion formation, the choice was obvious. We have surveyed the perception of this name among our community and have received a positive response.

As I mentioned earlier, we started as scientists, and for a while, it seemed to us that our product was so good that it would sell itself. However, when investors with suitcases full of money did not show up, we began to look for the source of the problem. It turned out that the reason was a team composed only of scientists. At this point, I had to face, perhaps, my greatest fear, a fear of enormous responsibility. I had to become chief everything officer. I was very excited about the idea of this project, and every decision I made influenced its development.

At first, doing something wrong was scary; I saw everything as a personal failure. Over time, however, I realized that this is my idea, my product, and only I can make it. Failure is just a new experience.

What makes IOON unique? What differentiates IOON from its competitors?

IOON is not a speculative project; it is a comprehensive solution that we have been developing for more than two years. It is a technology tested without any haste, which allows you to create a disinfectant from water. It’s a portable device that should last for at least a year.

IOON has interchangeable cartridges (place in the device for the formation of a disinfector), and each of them can produce up to 3 liters of sanitizing (about 9 months of operation). The device also has a mobile application that keeps users up-to-date on cartridge life, battery charge level and monitors their activity to develop a helpful “clean hands” habit. 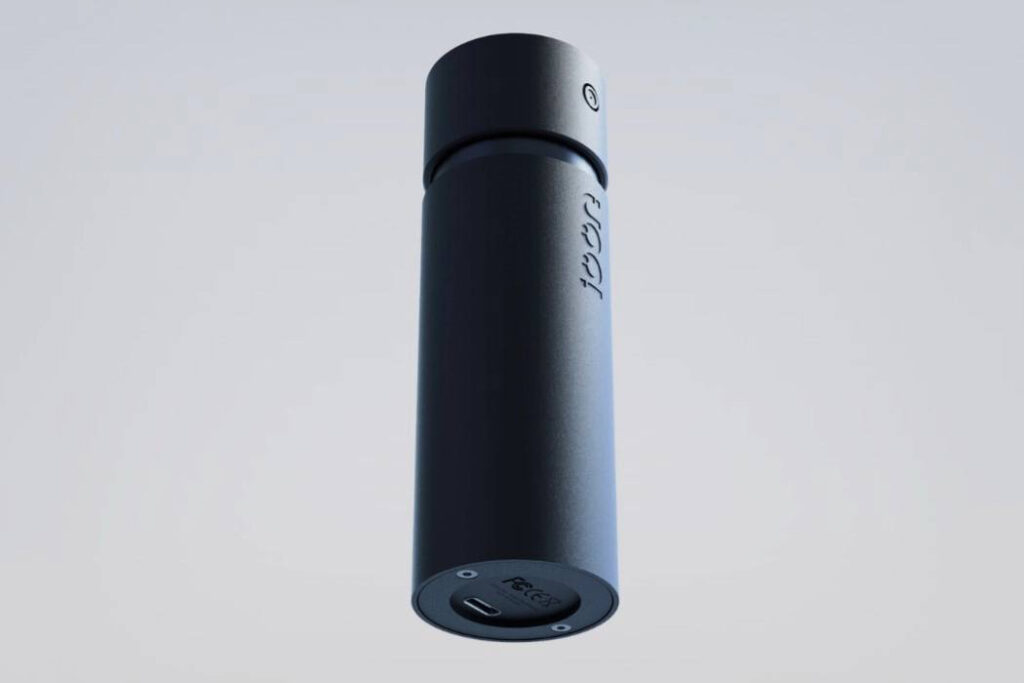 Turning water into a sanitizer is extremely on point today. But does it have potential in non-pandemic times? What does your strategy look like?

Of course, the Covid-19 pandemic emphasized the importance of using personal protective equipment (masks, disinfectants). We interviewed potential customers – mainly Americans-and. It turned out that adherence to hygiene rules is a daily occurrence. Frankly, in Ukraine, not everyone even understood what a disinfectant is; we had to explain it. So even in the “pre-pandemic,” it was a big challenge – to find a remedy that would be safe, gentle on the skin, and provide protection. In subsequent conversations with our supporters, we learned that for most, the use of disinfectants had become a habit, and they will continue to do so.

If we talk about numbers, by 2020, the growth rate of the sanitizing market was 22.6% between 2020 and 2027. During the pandemic, this figure rose to 55% between 2021 and 2028, with 31% being in North America. Now is the perfect time to enter the market. Fatigue with alcohol-based means is increasing, and alternatives are becoming more and more popular.

What has been one of your biggest failures, and what did you learn from the experience?

The biggest failure was the belief that someone could build my product better than me. We had experience working with subcontractors who called themselves professionals, but unfortunately, they were not. Dragging deadlines, work done at a breakneck pace without paying attention to details. What did this teach us? Never lose control, and don’t expect people to work with the same enthusiasm as we do. Explain the details and be interested in “why is this so?”. And, of course, take responsibility for completed/unfilled tasks.

Yes, we signed the first B2B export contract. We tested the business model hypothesis and found partners who believed in it. 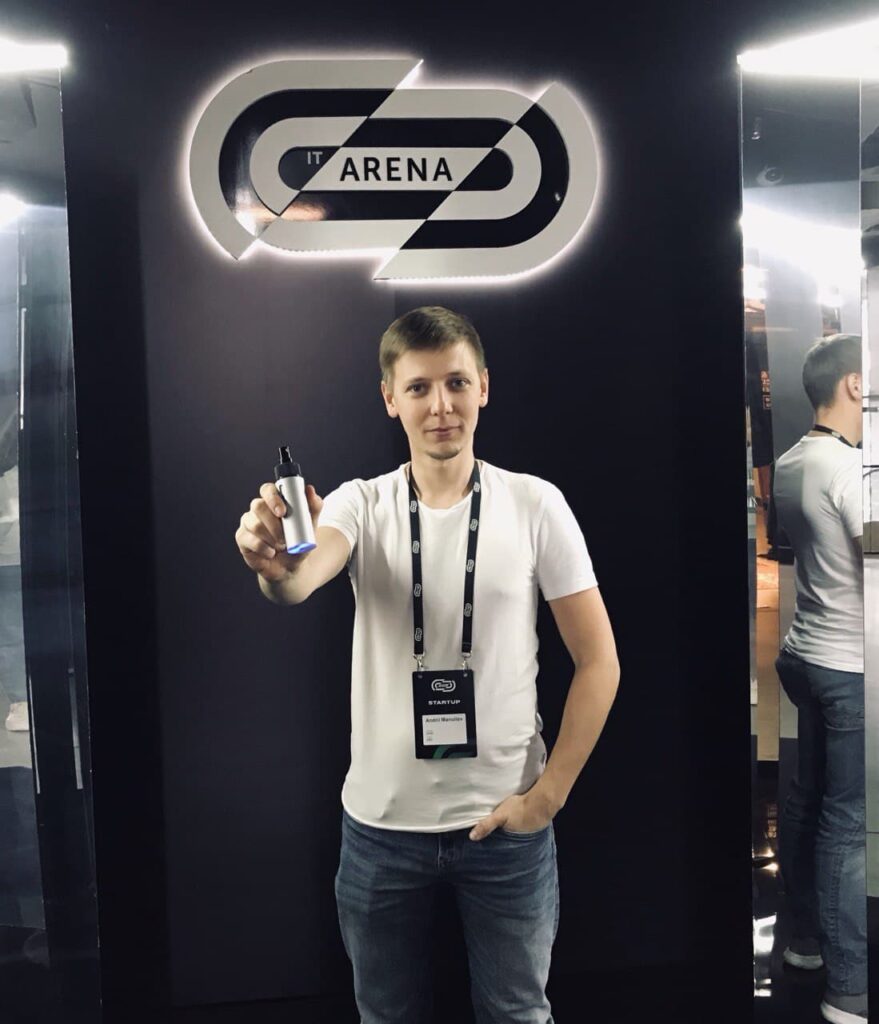 Some time ago, you introduced a pre-order button on our website. Why a pre-order? How does it work? What are your goals?

The primary purpose of the pre-order button was to test the interest in the product and build a customer base. We also tried call-to-action options via advertising and were able to estimate the cost of the lead. As a result, we have expanded our subscriber base to over 1300 contacts.

Working with a hardware startup imposes some limitations when it comes to development opportunities. In the case of IOON, it is necessary first to physically produce the devices. So, our 2021 plan includes testing your device with users. That’s why we launched a Kickstarter campaign to connect with our customers. Not with a subscriber on Facebook or a website, but with a person who bought IOON and has some expectations. Of course, as a founder, I love my product and consider it complete and ready for production. However, the customer has a powerful voice here.

After testing and validating IOON, we are ready for production. Distributors from Asia and Europe are already contacting us, so we plan to certify and enter the market. We will start with the EU and the US because there is our potential buyer.

First, we received positive impressions and new acquaintances. And, of course, experience. We also had a better understanding of the prospect of entering the European Union market. In this context, we have faced certification restrictions and have begun to reflect on this significant issue for a bulk product.
We look forward to working with Julia Shukurova, our export consultant. We now have an action plan for the certification needed to enter the market.

Furthermore, we are also preparing for laws that will only take effect in a few years. To do this, we have created a completely modular device – this allows you to replace only the non-working part and continue to enjoy IOON, saving money and reducing the negative impact on the environment. Some modules and used components can also gain a “second life” – this is how we want to minimize e-waste worldwide. 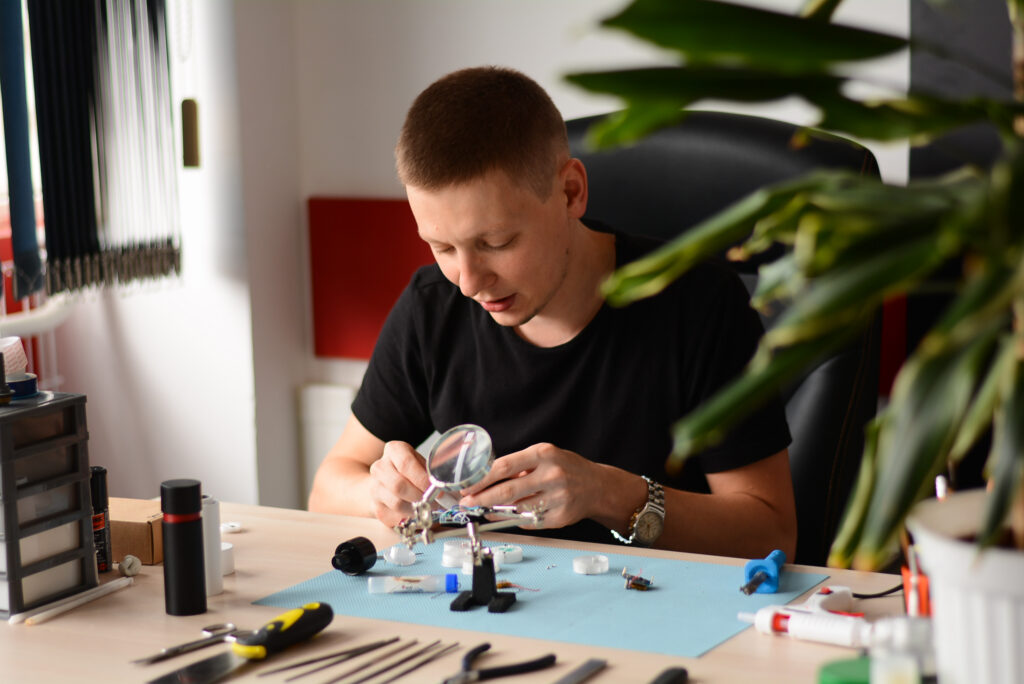 The grant from the Ukrainian Startup Fund was our first step in attracting investment, and it is great that we have gained this experience in our own country. Keeping documentation, organizing it, calculating the estimate, and most importantly – the ability to quickly get answers to bothering questions in your native language. A startup, especially at an early stage, is to sense anarchy and chaos (or maybe it was only with us). The terms of the grant, in turn, are such that you have to think about certain things, set goals, and stick to them. However, we faced the need to reallocate funds and extend the support period – the USF team helped get through this process quickly and easily.

Even after the grant is over, USF supports startups and builds an entire ecosystem for innovators in Ukraine. USF attracts international experts and partners. We are pleased that PUSB has joined this community. Participation in the project activities gave us a lot of new business knowledge and a massive amount of helpful feedback.

Our plans for the coming months are to launch a crowdfunding campaign on Kickstarter. Once again. We launched our first campaign in June, and in June, we canceled it. We received feedback from the first backers (people who made their own cash contributions) and realized that we were all too complicated. The information provided, the amount of it – only our former supporters who have known IOON for a long time could understand it. So we took the opportunity to cancel the campaign and resume it based on feedback we received. July 2021 is our second attempt to win customers.

Do you have any advice for first-time female founders?

I know from experience that until you learn something on your own, you approach the advice with a slight distance.

So all I can say is: