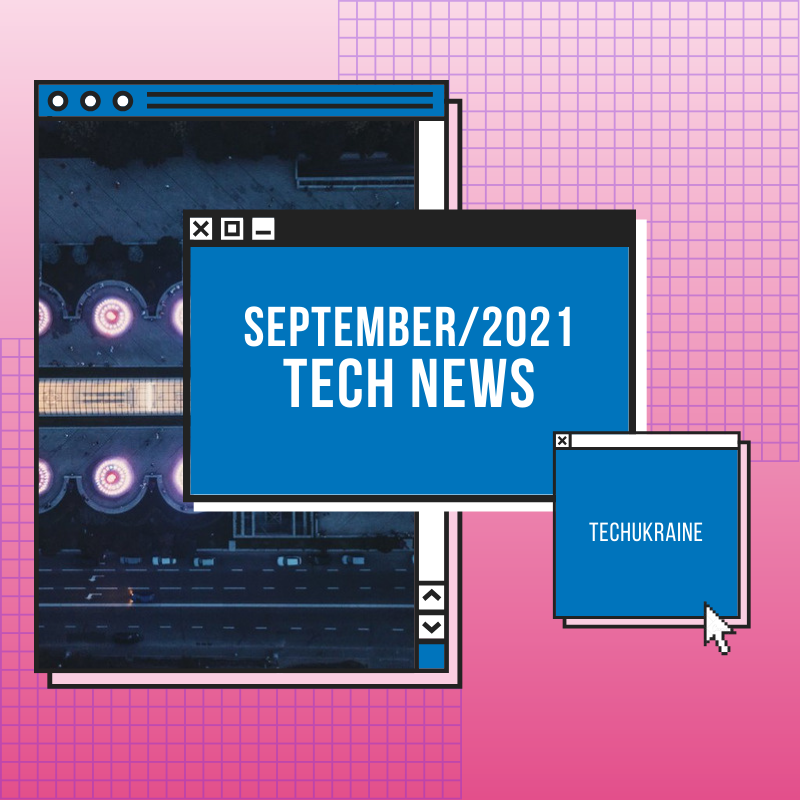 What has happened in the Ukrainian tech market in September 2021?

German fintech platform Solarisbank AG opened an R&D office in Kyiv, Ukraine. Solarisbank is the first Banking-as-a-Service platform with a full banking license that enables companies to offer their own financial products – read

TangoMe Inc., an American IT company, one of the top 3 streaming services in the Western market, opens an office and builds a team in Ukraine. Kyiv’s office already employs 20 people – read

Ukrainian tech giant Intellias announced the opening of a new office in Dnipro in the beginning of 2022. It will be the 6th R&D center in Ukraine in addition to Lviv, Kyiv, Odesa, Kharkiv, and Ivano-Frankinsk – read

The Ukrainian pharmaceutical company Farmak opens an office in the United Arab Emirates and plans to further strengthen its expansion in the Middle East and localization in Saudi Arabia and Egypt. In August, the company announced setting up a representative office in Vietnam. In July, the company started the construction of an innovative research R&D center in Kyiv, investing EUR 30 million – read

Ukrainian Revenue Grid (ex-Invisible.io), the Revenue Operations and Intelligence platform, announced it has closed $20 million in Series A funding to transform the B2B sales process through AI-based revenue insights and Guided Selling strategies. The round was led by W3 Capital Holdings, with participation from ICU Ventures and existing investors – read

Performetry, an American startup co-founded by Ukrainian Denys Grabchak, has received $1.2 million in a seed round. Startup develops an HR service for technological companies that analyzes employee data from corporate social media, polls, and tools, including Gmail, Zoom, Slack, MS Teams, and other programs – read

Digital fashion start-up DRESSX has closed an additional fundraise, bringing the company to a total of $3.3 million in venture funding. After announcing its last round in July, co-led by the Artemis Fund and Alpha Edison, this additional $1 million in funding comes from partners in the fashion, tech and blockchain industries – read

PeopleForce, a startup developing an HRM system for small and medium-sized businesses, has raised $700,000 from Sturgeon Capital and other investors. The company has representative offices in the United Kingdom and Estonia, but most of its employees are in Ukraine – read

Ukrainian online supermarket Foodex24 bought the Fresh Food at $300 000 and now will work under the united brand Goodex. Founded in 2020 in Kyiv, today the online retailer serves in Kyiv, Vinnytsya and polish Bydgoszcz – read

Ukrainian startup Legal Nodes has been chosen to work with one of the world’s top seed accelerators, Techstars. Legal Nodes will receive $120,000 and mentoring from Techstars’ experts in London, in exchange for around 6% of the company – read

Ukrainian neobank Monobank acquired Expirenza, a Ukrainian online platform for companies to collect feedback about their services from the customers, founded by Alexandr Gudkov and Mykhailo Mykhailo Seletskyi. The amount of the deal is not disclosed – read

GO TO-U announced the closing of the funding round, which is led by ABB EL Ventures and ABB Technology Ventures. GO TO-U is working with ABB to accelerate transport decarbonization by making the experience of driving and charging an electric vehicle simpler, more comfortable, and more accessible – read

GitLab, a startup developing an open-source web-based DevOps lifecycle tool that provides a code repository management system for Git, co-founded by a Ukrainian Dmytro Zaporozhets and Sid Sijbrandij, a Dutch entrepreneur, has filed for an IPO on NASDAQ. According to application documents, GitLab’s revenue in the last quarter was $58M, and the company’s valuation is nearing $6B – read

Belarus-founded tech firm PandaDoc, with R&D in Ukraine, has become a ‘unicorn,’ bringing its total valuation to $1 billion. The company doesn’t disclose how much money it raised during the most recent investment round – read

The winners of Pitch Alley participants within U Tomorrow Summit – Zeely App, Noty.ai, Organization.GG. They received $13,000 in funding and $65,000 to enter the European market, find partners and complete the necessary documents from the Connect Poland Prize LPNT and Lublin Science and Technology Park – read

Reface and Pawa announced the winners of the first offline hackathon WILD WILD HACK dedicated to machine learning: Hirshi — a tool for turning Instagram posts into animated memes; MemAss — a Telegram bot that makes personalized memes by turning words into images; The Maniacs Club — a memeing app, where you can swipe pictures to like and dislike them – read

Ukraine will be represented by the first national pavilion at Web Summit 2021 in November in Lisbon, Portugal, thanks to joint efforts by the government and business tech community – read

The Ukraine Pavilion at Expo 2020 Dubai will showcase a Ukrainian world-renowned e-bike Delfast that can travel 380km on a single charge. That’s enough to cover the distance from Dubai to Fujairah three times over – read

Fundamental project “Ukraine: Innovating for the Future” by BBC Future is about the country of innovative entrepreneurs who generate creative ideas – read

Ukraine took fourth place in the rating of the global crypto asset perception index in 2021, compiled by the U.S. analytical company Chainalysis. According to the data on the Chainalysis website, the first three places were taken by Vietnam, India and Pakistan. Kenya took fifth place. The United States came in eighth, China 13th – read

According to the Digital Quality of Life (DQL) Index 2021 that ranks countries based on five pillars internet quality, internet affordability, e-infrastructure, e-government, and e-security, Ukraine is 47 among 110 countries – read

According to the new report of the Worldwide broadband speed league 2021 by Cable.co.uk, Ukraine is 77th among 224 countries, Last year we was 92th – read

Kharkiv IT Cluster presented a report of the regional IT industry research titled KHARKIV IT RESEARCH 2021 conducted in partnership with KPMG. According to the results: the regional industry includes over 510 service and product IT companies; the number of IT specialists has exceeded 45,000; the IT industry in Kharkiv has grown by 29%, and its total sales volume in 2021 is estimated at 1.5 billion USD, which is a +53% growth vs 2019 – read

Lviv ІТ Cluster launches IT Research 6.0 – the sixth analytical research of the IT industry. This year the research will be even more extensive, covering two cities and will be carried out in cooperation with the Ivano-Frankivsk IT Cluster, the structure analysis of the city’s IT market will be conducted, the profile of the local IT specialists will be formed and the effects caused by COVID-19 will be highlighted – read

Yaroslav Boiko, Co-Founder & CEO of Reface, was shortlisted in the 2021 Investor Allstars Awards in the category The Young Entrepreneur of the Year 2021 by GP Bullhound – read

For the first time in 6 years of the competition in Ukraine, the ClimateLaunchpad Regional Final for Eastern Europe and Greater Middle East will be held in Ukraine by national lead greencubator – read

Alpha rocket, owned by the U.S. aerospace company Firefly Aerospace that was founded by Ukraine-born entrepreneur Max Polyakov, exploded two and a half minutes after liftoff on Sept. 3. This launch is a big milestone for Ukraine. Polyakov is the first Ukrainian who built and delivered a new rocket to the launch pad in independent Ukraine’s 30-year history – read

The Junior Academy of Sciences of Ukraine under the auspices of UNESCO opened the UF Incubator Ukrainian Future Incubator, a business incubator that helps to turn an idea into a commercially successful startup – read

The article is about the fintech potential in Ukraine, the UK and globally and was written based on a panel discussion held by Payal Raina, Founder at FinTech B2B Marketing on July 15th 2021 during the first-ever UK-Ukraine FinTech Summit – read

Interview with Ukrainian Maksym Kovalenko – the science star in one of the world-renowned ETH Zürich – Swiss Federal Institute of Technology, which is regularly featured in international rankings as the world’s best universities and the leading universities in continental Europe – read

Parliament legalizes virtual assets in Ukraine. The bill on virtual assets was adopted by the Verkhovna Rada at the second reading on September 8. The new law will create favorable conditions allowing companies to register in Ukraine, and not abroad. Taxes have not been paid on any transactions with virtual assets – read

The government approved the Ukrainian Space Program for 2021-2025. The National Targeted Scientific and Technical Space Program of Ukraine will be financed from the funds provided in the state budget, as well as other sources not prohibited by law. The estimated amount of required funds for 2021-2025 makes up UAH 40.78 billion ($1.52 bln), including UAH 15.76 ($590 mln) from the state budget – read

During the President’s working visit to California, Volodymyr Zelensky discussed with Apple CEO Tim Cook the possibility of Apple building a data center for iCloud services in Ukraine, following the example of the center, which was built in Denmark. The parties also discussed the census project and the Ukrainization of Siri’s personal assistant – read

The Ukrainian government has approved a draft budget for 2022 and wants to focus on the IT industry and significantly increase revenues. According to the Draft Budget 2022, Census, Action and IT will get almost ₴ 8 billion digital expenditures. According to the results of 10 years, the percentage increased in the IT industry, to 4.9% in 2020 and to 5.6% in the first quarter of 2021 – read

Ukraine takes an aim to digitize all public services and to switch to a paperless economy. In practice, this is the absence of barriers to e-commerce between Ukraine and the EU or the ability to use electronic digital signatures in foreign economic activity. All this will speed up the development and use of technologies CardID, BankID, MobileID. Electronic signatures, electronic seals will become an absolute routine for business due to the high-quality implementation of these laws – read

KHARKIV IT RESEARCH 2021 by Kharkiv IT Kluster – read

How Ukrainian developers looking for new jobs by DOU – read

Unicorn Investors: Who’s Backed The Most BillionDollar Companies — And Who Got In Early by CB Insights – read