Moodmate, an American startup with founders from Belarus, has closed the first round of investments in the amount of $200,000. Mikita Mikado, Co-founder and CEO of PandaDoc, participated in the round as the angel investor, while a major Ukrainian venture fund Digital Future was the round’s lead investor. Companies such as PetCube, Split Metrics, Friendly Data (exit in 2018), Let’sEnhance, Preply, and other wellness/health tech startups are among Digital Future’s portfolio.

Moodmate plans to use the funds raised to expand in the US market, to hire a Chief Marketing Officer and a Product Manager, and to continue the development of its science-based method of mood improvement. There are Moodmate apps for iOS and Android, a Telegram bot, and one for Facebook Messenger. The startup plans to launch a web version and its versions for Instagram, Twitter, and Slack, soon.

Oleksii Vitchenko, Founding partner, Digital Future: “We are investing in mental health tech, as it is a promising market, which particularly now has accelerated in growth. Moodmate has an interesting concept and approach, in which we see great potential. In addition, the guys are developing fast and testing many hypotheses: velocity is exactly what a startup team, that is aimed at success, should have.”

Mikita Mikado, Co-founder and CEO PandaDoc, Moodmate’s angel investor: “At a younger age, I thought that only people with mental disorders need psychotherapy. But after a year of weekly sessions, I now recommend this tool to my friends and family. Moodmate is unique in that it helps people improve their psychological state very carefully and unobtrusively. It doesn’t feel like psychotherapy, but rather like a game, which involves a wide audience and a funnel for deeper self-knowledge tools.”

Pavel Golubev, Founder and CEO Appodeal, Moodmate’s angel investor: “Moodmate has a great leadership team and promising product metrics. I use Calm on a daily basis to maintain work-life balance and believe that Moodmate can take it to the next level”.

Moodmate is a mood improvement coach. Its peculiar method lies in correcting destructive patterns of thought and behavior by replaying life situations. This helps to “rewire” the user’s brain, improving their mental state for a long time.

Moodmate was launched at the end of 2020 by a team of psychologists and developers from Belarus. The initial intention was to support Belarusians during the rough times of the revolution against Lukashenko’s regime. But after the founders received a lot of positive feedback from users, they decided to set a company up and help people worldwide.

Now Moodmate has 50,000 users and an international team of ten people. A third of Moodmate users come via recommendations of their friends. 40% of its users work with this coach 5-7 days a week, and many use it for more than ten months in a row.

The startup is now entering the US market. In addition to B2C, Moodmate is also testing its B2B line, conducting R&D on AI to monitor employees’ mental health in businesses.

Yauhen Klishevich, Co-founder and CEO Moodmate: “We believe that the future belongs to preventive medicine. Mental health care will soon become as commonplace as fitness classes. We are bringing this time closer by all means. And it seems that we are succeeding: Moodmate users “train” their mood with the help of our service on a prolonged and regular basis.”

The volume of the global market for mobile applications in the field of mental health promises to grow to $3.7 billion by 2027 (forecasted CAGR 24.2%). 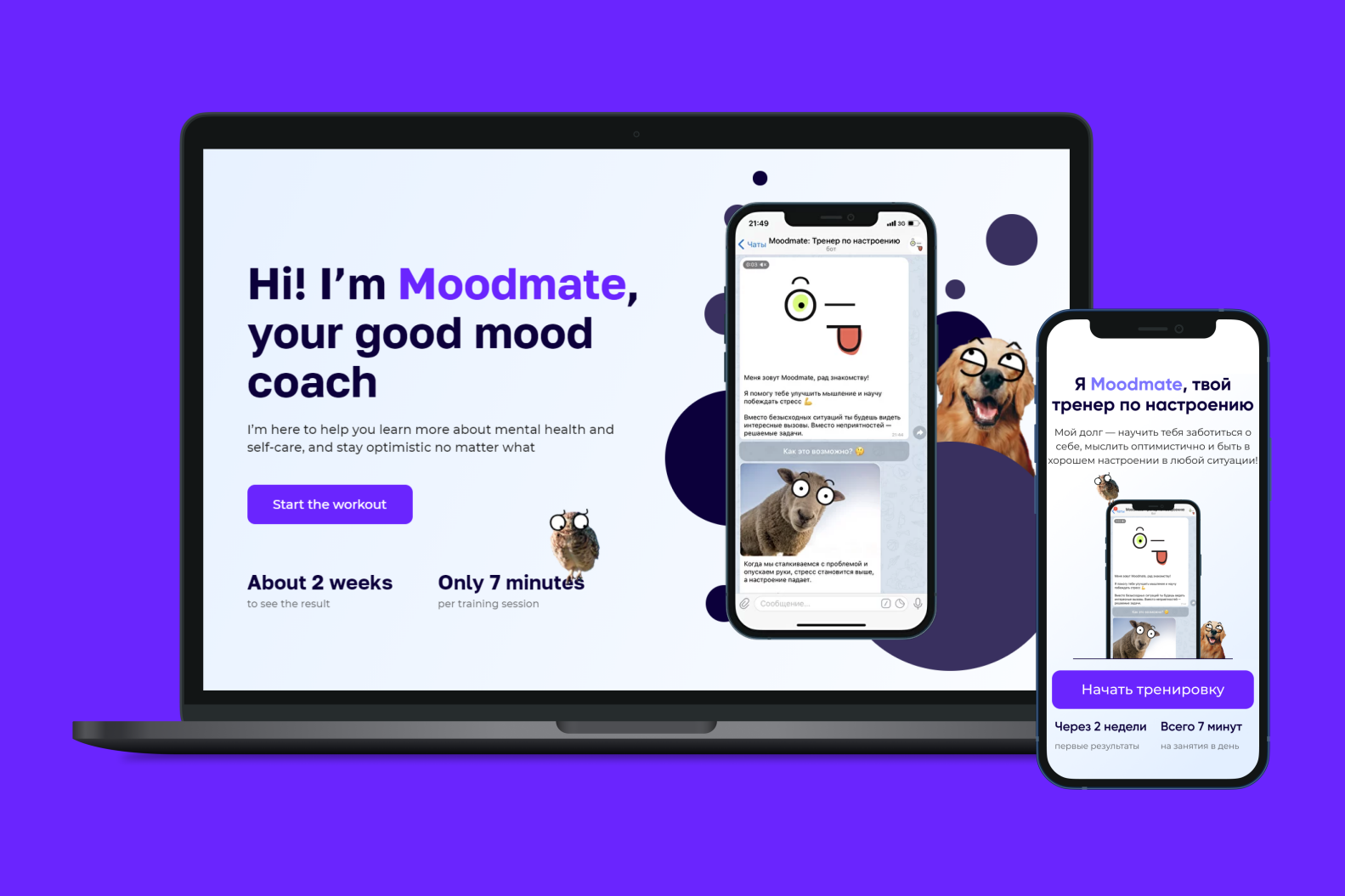