As the situation continues to unfold in Ukraine with alarming developments, the country has been putting up a resistance to Russia beyond the ground war: It’s been taking the fight to the digital front, leveraging the internet to fight against Russia’s attacks, to proactively go after Russia’s halls of power and to corral support — including financial support — from those who want to do something to help out.

Russia’s decision to switch from constant, menacing side-presence to full-scale attack may have caught some by surprise, but that was not the case for those who were already aware of the early warning signs.

“The war didn’t start four days ago,” Oleksandr (Alex) Bornyakov, the country’s deputy minister for Digital Transformation, said in an interview on Tuesday. “It’s been going on for eight years. Russia was attacking us all of those years.”

The country’s proactive digital campaign is already starting to pay some sizable dividends. As of yesterday, Bornyakov said, $100 million had been raised through various online donations from around the world. Of that amount, a full $25 million had come from cryptocurrency donations to accounts co-managed by Ukraine officials and those operating the networks in public-private partnership. Over half of that amount has, in turn, already been spent on supplies to help the Ukrainian resistance/ 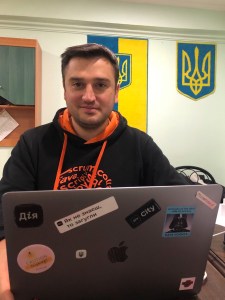