The State Service of Special Communication and Information Protection of Ukraine: The War in Ukraine: Pulse of Cyber Defense – Weekly analytics, April 11, 2022

During the first month and a half of war, Ukraine has suffered 362 cyber attacks. It is three times more as compared to the same period of the previous year (122 cyber attacks).

russia has been waging a war against Ukraine for eight years already both on the ground and in the cyberspace. During all this time, we have been witnessing escalation. Probably every cyber defense expert knows what BlackEnergy, NotPetya, attack13 cyber-attacks are.

Cyber attacks on the government and local authorities, security and defense and commercial organizations accounted for a half of the total number. Over a half of attacks were made for the purpose of data collection or distribution of malware.

CONCLUSIONS AND RECOMMENDATIONS
In view of the experience gained by Ukraine in fighting the russian war machine, the SSSCIP is willing to share its recommendations with the states that plan to strengthen their defense against the RF pernicious influence.

In addition, we’d like to remind that the SSSCIP State Cybersecurity Centre and the Computer Emergency Response Team of Ukraine (CERT-UA), jointly with the teams of the best Ukrainian cybersecurity companies and the world’s major producers of solutions provide comprehensive assistance in establishing multiple-tiered cyber defense systems of the IT infrastructure for institutions and organizations, irrespective of ownership.

It is free of charge.

All of us must stay resilient to external challenges, continue providing services to people and ensure the functioning of the business and the economy in whole. 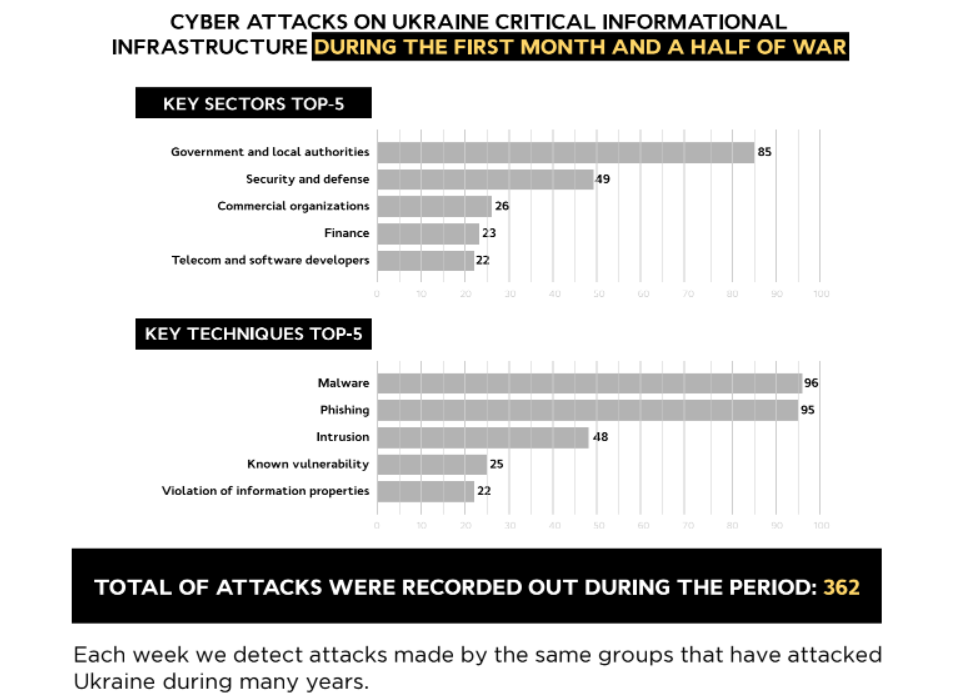