The definition of a startup must consider the short-term aspect. After startups implement their basic goal of finding an optimal business model, they transform into other types of enterprises usually within 5 years after their inception. This definitional regularity is reflected in the obtained empirical data. Among 158 surveyed enterprises, 3/4 operated for no more than 3 years and 87,3% of them operated on the market for less than 5 years.

The startups that took part in the survey have their headquarters in 16 Ukrainian regions, 55,1% of them are located in the Kyiv region. Every second surveyed enterprise was located in the capital city. This makes Kyiv not only the largest industrial, cultural and research center of the country, but also the central place of the Ukrainian startup ecosystem.

Kharkiv and Lviv regions are also important points on the startup map of Ukraine. 10,8% and 8,2% of enterprises participating in the survey have their headquarters there. On average two out of three startups are located in the largest Ukrainian cities with more than 1 million inhabitants — Kyiv, Kharkiv and Odesa. Less than 4,5% of the surveyed enterprises have their headquarters in cities with a population equal to or less than 100,000 people. 29,1% of startups are located in cities with a population of 101,000 to 1 million (14,6% in cities with up to 500 000 inhabitants and the same amount in cities from 500 000 to 1 million people).

The largest number of startups choose the form of a limited liability company or operate legally as a sole proprietorship. Another analytically important category is enterprises organized in the form of limited partnerships. The rest of legal forms (non-governmental organizations, partnerships, civil partnerships, joint-stock partnerships and limited joint-stock partnerships) account for a small percentage of the amount of surveyed startups. Almost a quarter of all enterprises that participated in the survey (and nearly 1/3 of those were founded in 2021) do not have an established legal form at the moment of participating in the survey. Among companies with an unspecified legal form, 36,8% were established in 2021, and as much as 50% in 2020 or 2019. This shows that their development direction is not very dynamic and specific. Some startups that took part in a survey operating without a specific legal form since 2012. 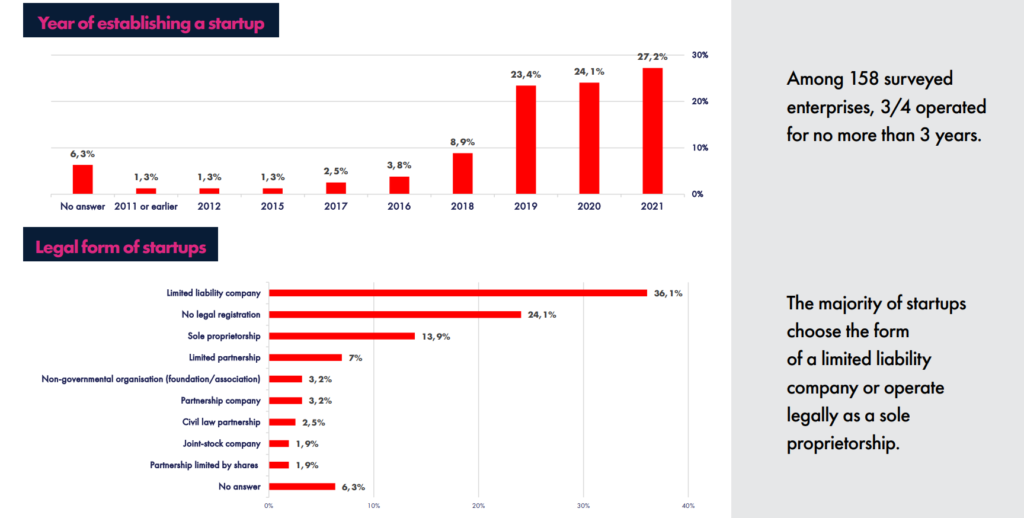 Over 4/5 of startups plans to develop in the following directions:

An important factor of the Ukrainian startup market development is investment support and the involvement of private and institutional investors. In 2019, USD 510 million was invested in this sector in Ukraine (over 50% more than the year before). In over 80% of cases, the investors were represented by foreign investment funds. Among the startups participating in the survey, three entities were financed entirely by business angels (2 – foreign, 1 – local), two had private grants only, and one received funding from foreign venture capital.

Due to the need of bootstrapping the founders have limited resources in the development of a startup. That’s why the procuring of the income from business activities is very important for them. It makes it possible to survive on the market long enough until the optimal business model is found. However, more than half of the surveyed enterprises do not generate any income yet. Which makes them completely dependent on external financing sources and exceptionally susceptible to development barriers described in the following sub-chapters of this report. Another 19,6% of enterprises generate some small income (up to EUR 10,000), which obviously cannot cover the costs of activities related to the development of products and services. Only one in 10 startups generates an annual income of over EUR 50,000.

Read the full report via the link