Lviv IT Cluster To Finance a Mental Health Center

On June 20, the Lviv IT Cluster together with the Lviv City Council and the First Medical Association of Lviv launched an initiative to establish a Mental Health Center. As part of the Center’s work, war veterans, internally displaced people and anyone who needs support in such a difficult time will be able to receive the help of professional psychotherapists, psychiatrists and psychologists.

In the first days of the full-scale invasion, together with the city authorities we began to organize centers for temporarily displaced people. More than ten thousand people got shelters there. But we understand that more needs to be done. We learned about the Mental Health Center from the city authorities and our Supervisory Board decided to support this decision. In addition, the topic of mental health is also the most relevant for our industry. Because hundreds of thousands of people from the north, south and east of Ukraine have been forced to flee their homes. And they need support, – says Stepan Veselovskyi, CEO of Lviv IT Cluster. 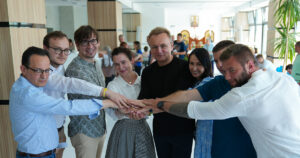