The Aircraft of ANTONOV Received Names Of Ukrainian Hero Cities

Ukrainian Antonov Company joins the communication campaign “Be Brave Like Ukraine” to honor the true heroism and resilience of the Ukrainian people, shown by them in the resistance to the massive armed aggression of the russia against Ukraine.

The aircraft of ANTONOV have received their own names of hero cities:

On their wings, these airplanes will carry around the world the newest history of Ukrainians who gave everything to save their homeland and resisted the russian invaders. The names of the hero-cities of Ukraine should resound over the planet. Their feat inspires unity against common adversity, new achievements, and victory! 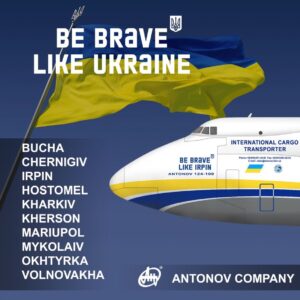