Open Eyes Charity Fund, established within IT company SoftServe, released a report covering six months of work during the war in Ukraine. Over this period, the team opened new volunteer hubs abroad, set up a network of partners, delivered hundreds of tons of humanitarian aid to different regions of Ukraine, and drove thousands of kilometers — all to save lives and bring the victory closer.

Since the beginning of the war, the fund has opened three new volunteer hubs abroad — in Wrocław, Warsaw, and Austin (USA) — and managed to partner with 57 NGOs in 11 countries. Thanks to this, Ukrainians who were affected by the war received 327 tons of humanitarian help, including medicines, food, clothes, and baby items. The fund’s support covered dozens of Ukrainian cities.

Helping medical institutions, including military hospitals, was a separate work direction. The fund delivered 24,000+ medical items, including glucometers, catheters, tourniquets, medicines, and other things needed to save lives.

Also, 15,673 items of personal protection were provided to the defenders. They include body armour, helmets, thermal underwear, thermal imagers, and binoculars. Additionally, the fund handed over 5,800 items of IT equipment (computers, modems, Starlinks) to governmental, public, and military organizations.

With the outbreak of the war, helping Ukraine and the Ukrainian people have been our primary focus. The team of 400 volunteers in different countries is working daily to find and deliver much-needed help to those who defend their land and loved ones from the aggressor and support those affected by the war. This report summarizes the first six months of our work in such format, but we’re not done here, and we continue to do everything possible to bring the victory closer. We’re very grateful to all our partners, volunteers, and everyone who supported our projects, – says Viktoriia Mishchuk, the director of the Open Eyes Charity Fund.

Besides co-financing humanitarian missions since the start of the war, in July, SoftServe allocated money to Open Eyes Fund to buy 29 ambulances for the hotspots. As of September, 20 ambulances were purchased and donated to defenders. The project is planned to be completed by November this year.

In general, the fund accumulated more than 1 million USD of donations from the company’s associates and Ukrainians, as well as transfers from abroad.

Corporate Charity Fund “Open Eyes” was established in 2014 by SoftServe. At first, it served as an internal platform for crowdfunding and implementing associate-driven charity initiatives. In 2017, the platform became open to external donors. Since then, everyone (including US and EU citizens) can join charitable initiatives and donate money to the fund’s projects. 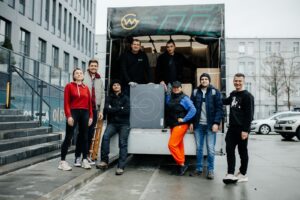