Russian-founded Immigram, a SaaS platform that is guiding tech workers during their relocation journey to the UK, won the Slush 100 Pitching Competition. The startup was awarded with €1 million investment, coming from five top venture capital funds — Accel, General Catalyst, Lightspeed, NEA, and Northzone.

18.11. just after the announcement of the winner, Yaroslav Krempovych, Senior Associate at Movens Capital, has provided a short but comprehensive explanation about the startup and the background of the founders – russian roots. 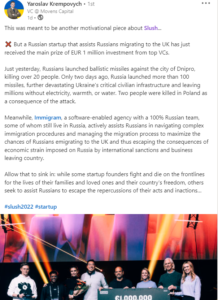 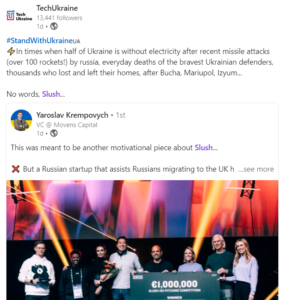 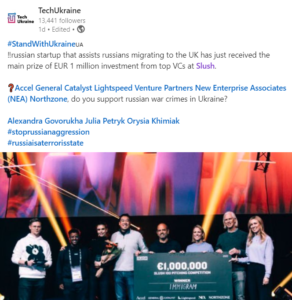 19.11, AIN founded that based in London Immigram is hiring in Moscow

Immigram was co-founded by Russians Anastasia Mirolyubova and Mikhail Sharonov in 2020. The startup is headquartered in London. The data from Russian job website hh.ru shows that the startup is hiring in Moscow. There are 6 job openings available for applying. The same positions can be found on the startup’s career page, and they are marked as remote.

So yes, supporting Russian projects during the full-scale war launched by Russia, which has also caused immigration problems and energy crises, looks like a deeply controversial decision. 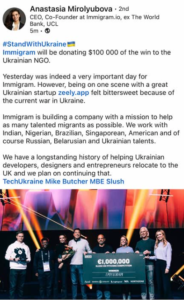 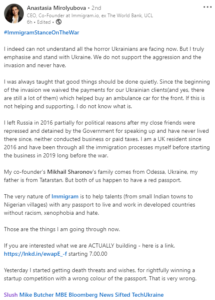 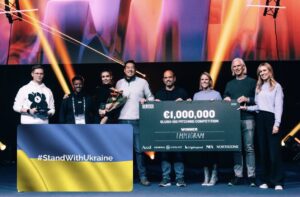 Also, after our request to Slush team via mail (in the morning 19.11), they officially published the statement via social media:

The Slush 100 jury will thoroughly review the background of the winner. 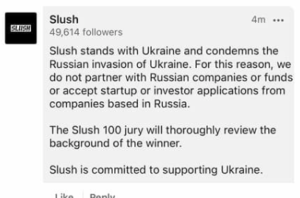 Mike Butcher, Editor-at-large of TechCrunch, took part in the discussion: 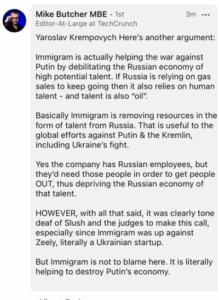 All of this was followed by massive wave of support by Ukrainian & international tech, PR and business communities. 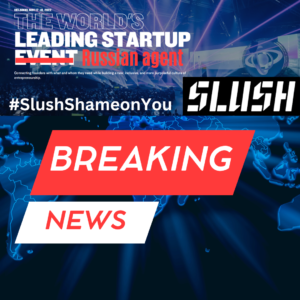 On 20.11 Yle News, the Finland’s first English-language broadcast, published the article about the scandal around winner at Slush: 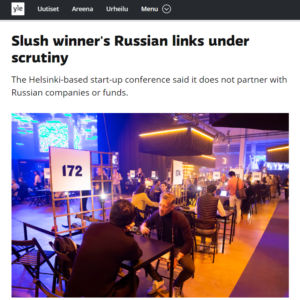 21.11 Slush decided to reverse its controversial decision to award Immigram. The decision comes after a flurry of criticism over the award, with many arguing that Europe’s tech scene shouldn’t back companies with any Russian ties.

In light of new information on the extent of the Slush 100 Pitching Competition winner’s operations in Russia, Slush has decided to revoke their win. We keep an eye on this topic and will keep you posted! Stay Tuned!