The Economist: Lessons from Russia’s cyber-war in Ukraine

And Russia attempted it on February 24th, when, less than an hour before its tanks started rolling into Ukraine—on their way, they thought, to Kyiv—its computer hackers brought down the satellite communications system run by Viasat, an American firm, on which its opponents were relying.

Victor Zhora, head of Ukraine’s defensive cyber-security agency, said in March that the result was “a really huge loss in communications in the very beginning of war”. A Western former security official reckoned it took “a year or two of really, really serious preparation and effort”.

Win some, lose some. The Allies won. The d-day landings were successful. Darius lost, and lost his throne. Likewise, Russia’s advance on Kyiv was repelled. Its invasion force in that theatre was defeated. Despite the effort expended on trying, Russia could not generate a sufficiently thick fog of war through cyberwarfare. And that is interesting. Though cyberwarfare has been a hard-fought and important part of a conflict that has acted as a testing ground for this still-novel form of battle, it does not seem to have been the killer app, as it were, that some expected.

“It is likely that the Ukrainians taught the US and the UK more about Russian cyber-tactics than they learned from them,” notes Marcus Willett, a former head of cyber issues for Britain’s National Cyber Security Centre.

Probably, the most important wartime cyber-activity, on both sides, is that aimed at intelligence gathering or psychological warfare rather than destruction. 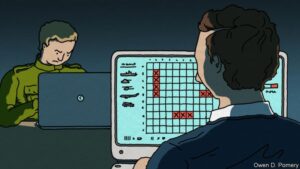