The Economist: Ukrainian ingenuity is ushering in a new form of warfare at sea

Ukraine announced on November 11th that it plans to build 100 of the vessels, paid for, it hopes, by crowdfunding.

Until Ukraine’s attack on the Black Sea fleet, strapping bombs to remote-controlled boats had mostly been the preserve of irregular forces. Iran did test some in 2017, against a Saudi Arabian tanker. But things really got going when the Houthi movement, a group of rebels against Yemen’s Saudi-supported government, began, with apparent Iranian support, to use uncrewed speedboats stuffed with explosives. Also in 2017, one of these hit Al Madinah, a Saudi Arabian frigate, in the Gulf. The explosion killed two sailors. Since then, according to data compiled by Harvard Haugstvedt of Oslo University’s Centre for Research on Extremism, the group has launched more than 20 further attacks on commercial ships and shore facilities.

Partisans’ drones are also going underwater. In 2021 Israel’s navy destroyed what it described as a bomb-carrying submersible drone minutes after its launch into the Mediterranean by members of Hamas. According to Israel, Hamas has been honing the technology for years. Each vessel, it claims, can carry about 30kg of explosive.

Efforts by governments to weaponise uncrewed boats have generally taken a different tack. Rather than packing vessels with bombs and ramming them into their targets, the world’s navies seem more interested in mounting guns and missiles on usvs and using them like any other warship, only without sailors on board. As far back as 2012, for example, America’s navy was experimenting with a rigid-hull inflatable boat equipped with missiles and a remotely operated machine gun. In coming years, it plans to spend billions of dollars developing a colourful array of usvs, some of which may be as long as a superyacht and capable of carrying long-range missiles and other weapons.

China has sought to keep pace, with numerous programmes that mirror America’s efforts. One of these—a heavily armed vessel called the jari—has made regular appearances at weapons shows across the world, complete with mock-up guns and torpedoes. That suggests China is interested in exporting the technology as well as using it itself.

In Israel, meanwhile, Rafael, a government-owned armaments company, has spent years perfecting a speedy usv called the Protector. In 2017 it decked one out with Spike anti-tank missiles and later demonstrated it in a nato live-fire exercise. And edge, a state-owned Emirati conglomerate, is collaborating with iai, another Israeli firm, to build a similar vessel.

Elsewhere, Britain has, since 2019, been developing such capabilities through its NavyX project, which it describes, with refreshing honesty, as an “Autonomy and Lethality Accelerator”. Greece, Portugal, Singapore, South Korea and Turkey have also been rolling out armed usvs.

For many it [these attacks – Sevastopol’s naval base and Admiral Makarov] marks the start of a new age in naval warfare, – H.I. Sutton, an author, blogger and naval analyst who has studied footage of the Ukrainian drone boat. 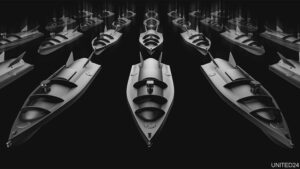