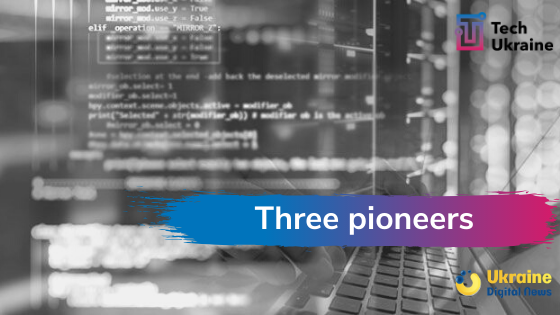 This series of articles shows how tech entrepreneurs living or born in Ukraine explore their motivations and dreams and also the many obstacles they face, striving to shape new products and services worldwide. For young entrepreneurs, the series offers a window on the experiences of their tech colleagues, mentors and role models.  For others interested in gaining better insight into the Ukrainian tech startup scene, it provides a basic overview and clearly illustrates the steadily growing influence of this country’s tech entrepreneurs on the ever-evolving global markets.

There have been quite a few Ukrainian tech entrepreneurs who set out to firmly establish their products in global markets.  Some left the country to become permanent émigrés, while others continue to travel back and forth between Ukraine and the USA, the EU and elsewhere.  These three individual profiles reveal their ability to take on unique challenges that led to great personal and financial success.

Jan Koum is possibly the most financially successful Ukraine-born tech entrepreneur in Silicon Valley.  In 2009, he co-founded Whatsapp, which became the world’s biggest mobile messaging service. Before that, he worked at Yahoo! for almost 9 years. Koum had emigrated to the USA from Ukraine with his family in 1992 at age 16.

Facebook bought Whatsapp in 2014 for $22 billion in cash and stock and he went to work for them. Although he no longer works at Facebook today, the Ukrainian-American is reportedly worth $9 billion. (See details in the April 2014 edition of Wired magazine.)

Koum is a prominent example of Ukrainians who left their country in the late 1980s and early 1990s when the remnants of a Soviet communist government still controlled most aspects of their lives. They left everything behind and took the major risks that émigrés do. In Koum’s case, the payoff was substantial.

Unlike earlier generations of Ukrainians who came to the US at the turn of the 20th century to work in coal mines or steel mills of Pennsylvania, or the post-World-War-II political refugees who became engineers, academics and other types of professionals, some of the more recent millennial and Gen X émigrés chose a very different path to success: technology and startups.

Vitaly M. Golomb was 8 years old in 1989 when he left Odessa, Ukraine, with his family and arrived in San Francisco as refugees after spending five months in Austria and Italy.  His first exposure to computers started at home. Later he and his best childhood friend were chosen by his friend’s Dad to be pre-teen interns at ParaGraph International Inc.

This company, founded by a Soviet émigré, played a key role in the development of handwriting text recognition software for the Apple Newton.  ater, Golomb would become the youngest employee of the print and copy shop Kinko’s. He would subsequently open a print service bureau with his father and so his career as a serial entrepreneur began.

While studying at Computer and Video Imaging at Cogswell Polytechnical College, Vitaly headed a design team in an enterprise software Dot Com. In 2001, Golomb returned to the print service bureau as CEO and by 2005 he had tripled the size of the company and sold it to a competitor.

He then opened a design firm in San Francisco, which grew to a second office in Los Angeles and a development team in Eastern Europe.  In 2010, Keen Systems was spun outas an ecommerce platform for the printing industry. Keen was sold in 2015 and, after some consulting and board roles, he went on to help establish HP Tech Ventures, the corporate venture capital arm of HP Inc.

In 2018 Golomb left HP and established a boutique investment bank, GS Capital.  As a managing partner he is responsible for advising global emerging growth tech companies on M&A, financing and business development.

The businessman published “Accelerated Startup” in 2017, a well-regarded book used by several business schools and accelerators as a textbook for technology entrepreneurship.

He is frequently a speaker at tech conferences, a mentor to startups, a contributing writer at TechCrunch and a member of the supervisory board of the Ukrainian Venture Capital and Private Equity Association (UVCA).

Here is Golomb’s advice to Ukrainian tech entrepreneurs who want to set roots in Silicon Valley.  “They need to do their homework. They need to come here over a period of time and look at companies; where do they fit in, how do they look in context. And start building relationships, hire local people and really focus on building the business and not let their emotions get in the way.”

Today, Golomb continues to be an angel investor and travels on a regular basis to Ukraine. He is based in the San Francisco Bay Area.

Yegor Anchyshkin, a cofounder of the mobile face recognition software company Viewdle, attended the Igor Sikorsky Kyiv Polytechnic Institute of Physics and Technology in Kyiv, Ukraine, with a focus on computer science and applied mathematics. He started working on software projects while still at the university.  He graduated with his Master’s Degree in 2003. After graduation, Anchyskin went to work as an investment manager for Techinvest, which was the first venture capital firm in Ukraine.

“At the time, venture-backed startups were a completely new thing and you had to shape what you wanted to invest in” he recalled.  “I met basically everyone who was involved in software development in Ukraine.”

Anchyshkin quickly went up the learning curve as he helped software startups to shape their ideas and learn about potential markets.

Before he left Techinvest in 2006 to cofound his own company, Anchyshkin met Yuri Frayman, who was born in Odesa, Ukraine, but emigrated with his family as a teenager to Israel and later to the US.  Frayman became a very successful businessman in the U.S. and was interested in starting a VC firm in Ukraine.

Anchyshkin told him about his idea for mobile face recognition software and together with Yuriy Musatenko they founded Viewdle in 2006. Frayman became the first CEO.  The company had offices in San Jose, Calif., and Kyiv.  Laurent Gil, who was born in France and attended university there and later obtained an MBA from the Wharton School of Business in the US, was CEO from late 2007 until the Spring of 2012.  (Gil and Anchyshkin talked about their Viewdle startup experience at IDCEE 2013 in Kyiv).

Viewdle’s product was a great success and the company was sold to Google for a reported $30-$45 million in 2012. According to Texas-born Jason Mitura, who served as Chief Product Office and later CEO for Viewdle and eventually became active in other ventures like Ring Ukraine, “it was the largest US venture-backed exit ever in Ukraine up to that time.”

While still with Viewdle, Anchyshkin turned his entrepreneurial attention to the area of foodtech in Ukraine. In 2010, he founded Zakaz.ua, a major grocery distribution service that fulfils and delivers orders for large grocery retail chains.

It is estimated that Zakaz has about $10 million in annual revenue.  “We were doing 70-80% of all grocery deliveries in Ukraine,” said the entrepreneur.  Zakaz expanded to the Boston area in 2015 after participating in the Techstars startup accelerator.  It operates in the US under the CartFresh brand. CartFresh was acquired by Takeoff Technologies in 2017.

Formerly CEO of CartFresh, Anchyshkin is now CTO with Takeoff and responsible for managing software development teams in the US and Ukraine.  The company currently offers robotics-driven eGrocery technology and is a major player in the industry.

Although Anchyshkin was working in Ukraine as CTO while still with Viewdle, he moved to the USA permanently in 2015 to develop CartFresh, as reported by Kyiv Post. Today he offers advice to young Ukrainian millennial tech entrepreneurs.

“Be afraid of nothing.  Even if you fail in your 20s, you can afford risks then that you won’t be able to take later on,” he tells them.