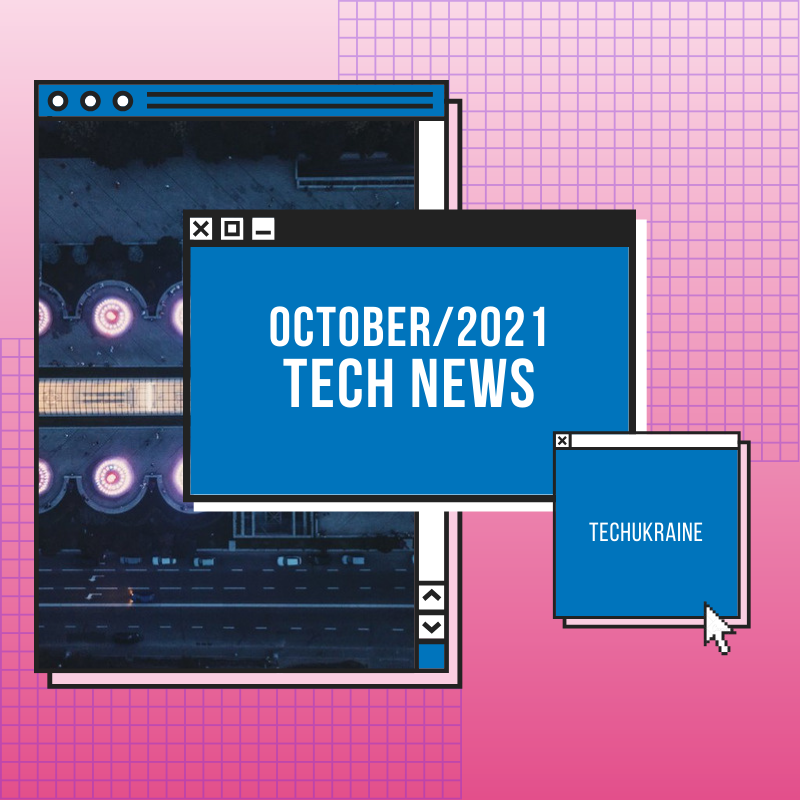 What has happened in the Ukrainian tech market in October 2021?

French military-industrial firm Thales that specializes in the development of high-tech products for defense and security, aerospace, and transportation, intends to open an office in Ukraine and has already appointed a director – read

Tel-Aviv based Bringg, a cloud platform helping retailers and logistics providers to scale up and optimize their customer experiences and logistics operations, opened office in Kyiv in October, additionally to Lviv – read

Appsulove, a Belarusian company developing mobile applications and games, has opened an office in Kyiv. The game studio plans to hire up to 50 professionals – read

The largest Ukrainian tech company EPAM will open a new office in Ivano-Frankivsk at Promprylad.Renovation, an innovation center on premises of an old plant, – read, as well as in Zaporizhzhya – read

Solarisbank, Glovo, BlaBlaCar, Lyft, Revolut have recently opened R&D centers in Ukraine. The article is about the case study of the Solarisbank R&D and why Ukrainian cities are attractive for international tech companies – read

Founded by Ukrainian Dmytro Zaporozhets, the DevOps Platform GitLab is taking over Nasdaq and Times Square with a valuation of $15 billion – read

Ukrainian Depositphotos and Crello have been acquired by global design company Vistaprint, the design and marketing partner to millions of small businesses around the world. According to TechCrunch, the amount of the deal is $85 million – read

Facemoji, a plug-and-play tech platform to help game and app developers put avatar systems into their apps with the startup’s SDK, has raised a $3 million seed round led by Play Ventures, with participation from Twitter and Ukrainian Roosh Ventures, alongside some angel investors – read

Competera Pricing Platform, an AI-powered platform helping retailers to set optimal prices, raised $1.5 mln from Flyer One Ventures, and American angel investors. The new round of investments will help the company to scale up in the USA market – read

Ukrainian Party.Space, a virtual event platform that is in between games and virtual events, has raised $1 million to scale up its metaverse-themed virtual events business. The round led by EQT Ventures, with participation TAVentures, Day one Capital, ICLUB – read

Kazakhstan’s largest financial technology firm Kaspi.kz has signed a purchase agreement to buy Ukraine’s subsidiary of Kazakh BTA Bank. According to Forbes Ukraine, the transaction could cost up to $9 million. With BTA Bank’s banking license and Portmone’s payments licenses, Kaspi could launch its Super App financial service in Ukraine – read

Ukrainian SAAS-startup Choice QR, with offices in Ukraine and Czech Republic, that develop QR-menus, delivery and takeaway for cafes, raised € 400 000 investments in pre-seed round in addition to previous € 300 000 – read

The Ukrainian Startup Fund (USF) has announced the results of the 30th and 31st Pitch Days: 6 pre-seed stage startups became winners and received $25,000 grants, 4 seed-stage startups got $50,000 each – read

Kyivstar will possibly acquire a fixed-line operator, Datagroup. The deal may be worth about $100 million, it became known to UBR from informed sources – read

Aristocrat Gaming, an Australian gambling machine manufacturer, bought Playtech with Estonian and Israeli origin in order to consolidate the assets. The price agreed by the parties is A$5 billion ($3.7 billion). In Ukraine, Aristocrat Leisure Limited has been known since 2017, after it purchased the Israeli game publisher Plarium with offices in Kyiv, Kharkiv, Lviv, and Odesa for $500 million – read

Scopely, a US-based mobile game developer and publisher with an office in Ukraine, announced the acquisition of GSN Games, the gaming division of Sony’s Game Show Network (GSN) in a deal worth about $1 billion – read

Ukraine is joining the EU’s Horizon Europe research and innovation program, which has a budget of almost € 100 bln – read

Founded by Ukrainian Max Polyakov, Firefly Aerospace has successfully completed NASA’s Critical Design Review of its Blue Ghost lunar lander and is on schedule for September 2023 lunar mission. The 2023 Blue Ghost mission will be the first of what are expected to be yearly lunar surface missions for Firefly – read

Ajax Systems has been announced as a finalist in 2 categories at this year’s Security & Fire Excellence Awards. Ajax new outdoor detector with photo verification MotionCam Outdoor was shortlisted for Security Hardware Product Innovation of the Year. The company will also compete for the title Security Hardware Manufacturer of the Year – read

Ukrainian Netpeak Group launched the online university of up-to-date knowledge Choice31. Founder of Odesa-based Netpeak Group, the group of companies with the main mission “move from the third world to the first without changing our geographical location”​, Artem Borodatyuk will invest in the digital project up to $1 MLN – read

Ukrainian medicine search and delivery platform Liki24 launches a mobile application for iOS and Android to improve the user experience. Pharmacy on the screen will provide access to 40,000 products from more than 5,000 pharmacies – read

On 11 October, representatives of business and government gathered at the EBA IT Conference by European Business Association to discuss the state of IT, tech education in Ukraine, prospects, and challenges of IT development – read

Key educational achievements in IT education for the 2015–2021 by IТ Ukraine Association: 12 systemic educational projects involving 72 companies and over 48,600 participants; educational conferences Synergy. IT Business & IT Education and IT Ukraine Education Summit – read

Kharkiv IT Cluster with the support of USAID Competitive economy program made the research of the labor market, softlanding for developers and tech specialists in Kharkiv – read

2 Ukrainian esports players win The International, the biggest esports event by prize pool and viewership. The team consisting of two Ukrainians and three Russians won $18.2 million from a record prize pool of $40 million during the Dota 2 online game event in Bucharest – read

During 7-9 of October in Lviv, ІТ Arena 2021 gathered global changemakers, the most inspiring thinkers, Ukrainian and international tech community, and key stakeholders of the sphere. TechUkraine visited 3rd day of the event and wrote the article with the reflections on it – read

An online publication that is aimed to gather information about the market situation Investors Book 2021 begins collecting entries – join and make an important contribution to the development of Ukraine’s new economy, just fill out the form – read

The overview of the fintech landscape in Ukraine and abroad, and the showcase of the success story of Ukrainian fintech outsourcing cooperation between Daxx and Vive, a Netherlands-based startup – read

President Volodymyr Zelensky on Oct. 5 vetoed a bill legalizing cryptocurrency in Ukraine and sent it back to parliament for changes. The bill that passed the Verkhovna Rada in September says that the virtual assets market would be regulated by the Ministry of Digital Transformation, the National Bank of Ukraine (NBU), the National Securities Commission (NSC) and a new independent regulatory body that would have to be created – read

During the trip to France, the Ukrainian delegation visited the international security exhibition Milipol Paris, which brings together professionals from this sector at all levels. The Ukrainian top official spoke about the progress made by the Ministry of Digital Transformation in the two years of its existence. Mykhailo Fedorov shared Ukraine’s experience in combating cyberattacks. Participants also discussed the need to consolidate efforts to combat cybercrime – read

The Ministry of Digital Transformation will cooperate with the Czech Republic in the field of digitalization: smart city, Diia City, interaction through the Entrepreneurship and Export Promotion Office, cooperation at the regional level – read

The Strategy of Intellectual Property Development will be approved in Ukraine for the first time. It was drafted with the participation of international and national experts and the document provides for the disclosure of the powerful potential of the intellectual property sector, inventory of IP objects for further protection and commercialization. The strategy is a list of measures that will be developed and implemented by the Government to stimulate and strengthen the effective creation, development, management and protection of intellectual property at the national level – read

The Cabinet of Ministers of Ukraine adopted a resolution “On the Unified Ecological Platform EcoSystem” which defines EcoSystem as a national environmental automated information and analytical system integrated with the Diia portal. EcoSystem is designed to provide access to environmental information, as well as – effective electronic interaction between government, business and community to obtain administrative services in the field of environment protection – read

Within the 23rd Summit between Ukraine and the European Union, President of the European Commission Ursula von der Leyen commended the significant development of Ukraine in the digital sphere and highlighted important aspects of joint activities in the future, including the introduction of 5G, which will help move closer to the EU internal market – read

Ukraine presents the potential of the space industry to the world at the thematic week “Expo2020: Space Week”, a weekly event “UA Space Focus” in the pavilion of Ukraine within the Expo 2020 in Dubai – read

Ukraine is number one by RA Capital – read