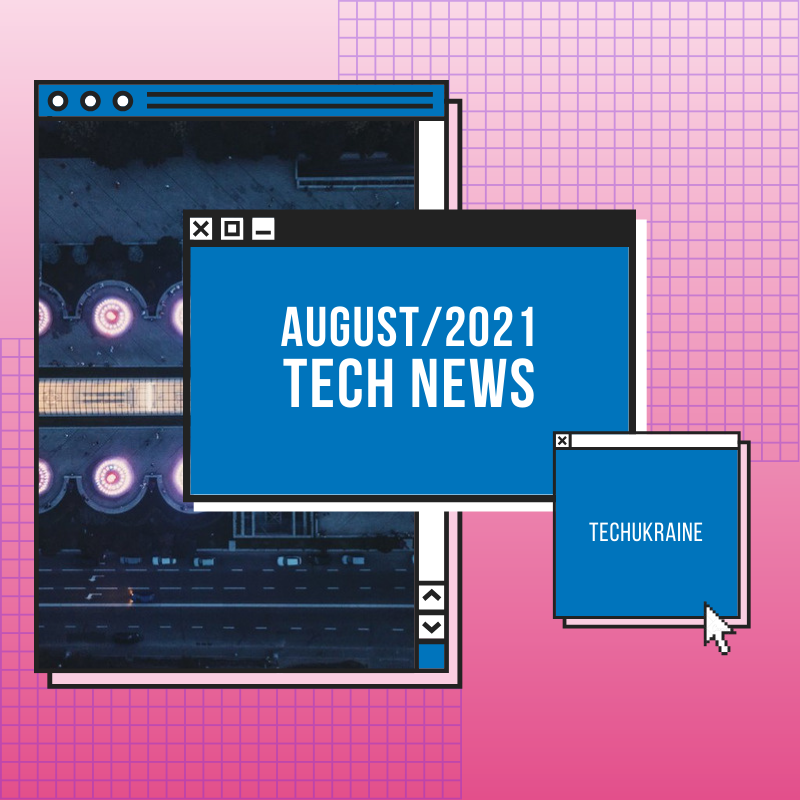 What has happened in the Ukrainian tech market in August 2021?

Ukrainian ELEKS is launching its newest office in Zurich, Switzerland, continuing its global expansion and strengthening its presence within central Europe. Through the creation of this new Swiss hub, the company will boost its partnerships with new and existing Swiss clients – read

Ukrainian Lviv-based tech giant SoftServe bought by 377,5 mln UAH a high-tech ‘campus’ on an extensive 13-hectare site of a former prison in a southern part of Lviv city – read

People.ai joins the unicorn club after announcing the $100 million in Series D funding at a $1.1 billion post-money valuation. This series was co-led by Mike Dinsdale, CFA Dinsdale of Akkadian Ventures and Abdulla AlBanna of Mubadala Capital, with participation from existing investors including ICONIQ Capital and Lightspeed Venture Partners. – read, read

German online car part retailer Autodoc is preparing a Frankfurt stock market flotation in the autumn that could value it at about 5 billion euros ($5.93 billion).Autodoc operates in Ukraine since 2017, has 3 offices (Kyiv, Kharkiv and Odesa) and over 1000 employees – read

GIOS, a Ukrainian platform for blended learning of mathematics, has raised $400,00 from UVO Ventures, including smart investments. The smart investment means that the startup will receive 85 percent of the funds in cash and the rest — in the services of programmers, lawyers, and other professionals – read

The Ukrainian project VRpartments, which develops a VR solution for real estate, has received a $310,000 grant from the Poland-based incubator Unicorn Hub – read

AI startup Livee, which automates the sales of interior landscaping and measures its impact on employee productivity, has raised a $250,000 round of investment from the startup studio Greenpact Future Labs. – read

Ukrainian cryptocurrency startup Weld.money announced closing an investment round from Concorde Capital, Magnus Capital, and 7 O’Clock Capital. The amount of the round is undisclosed – read

Ukrainian messenger for partners and family members Obimy has raised investments. The total amount is not disclosed, but the valuation reached $2 million – read

Ukraine has already become the world’s first country that legalized digital passports: starting on Aug. 23, all Ukrainian institutions are obliged to accept personal IDs shown through the Diia app – read

DOU presented the ranking of the largest tech companies in Ukraine (summer 2021) – the top five leaders have remained unchanged: EPAM, SoftServe, GlobalLogic, Luxoft, and Ciklum – read. The dynamic infographic of the top Ukrainian IT companies – check out how changing the chart of leaders during 10 years.

The Independent 30 project reveals the formation and development of the modern Ukrainian nation through the stories of famous Ukrainians. Tech industry is represented by well-known Yaroslav Azhnyuk, Petcube, and Dima Shvets, Reface – read

On the occasion of the 30th anniversary of the proclamation of Ukraine’s Independence, cool overview of the most significant achievements, people, places of Ukraine and, of course, Ukrainian technologies – read

The British aerospace company Spacebit, founded by Ukrainian Pavlo Tanasyuk in 2014, in cooperation with American partners, will carry out the first Ukrainian mission to the Moon in 2022, within the framework of which equipment for scientific research will be delivered to the satellite surface – read

Ukrainian-made engines powered a European Vega rocket into space, allowing the launch of five satellites into orbits. Designed and manufactured in Dnipro by the SE “PA Yuzhmash”, the engines were transported to Kourou, French Guyana for launching the Italian-made rocket – read

Ukrainian e-bikes company Delfast has set an electric speed record at Bonneville Speed Week 2021, the USA. This feat was achieved with an electric version of a DNEPR motorcycle – Delfast Dnepr Electric – read

Ukrainian CleanMyMac X has received the Red Dot Award: Brands & Communication Design 2021. Back in 2017 Gemini 2, another MacPaw application, also got the Red Dot Award and our award-winning family of products keeps growing – read

Ukrainian Vera Platonova, Senior Vice President SEE CIS Visa, was selected as the finalist at THE FUTURE OF Emerging Europe AWARDS 2021 in the category Female Business Leader of the Year – read

Ex-CEO of Bolt Ukraine Taras Potichnyi joined the Kyiv-based e-commerce platform for medicine delivery Liki24.com as the Vice-President of Expansion. The company has recently opened a new market in Bucharest, Romania. Last year the company kicked off in Poland and now operates in 3 cities: Warsaw, Krakiv, Gdansk – read

The CEO of the Taibah Valley investment campaign Abdulrahman Alolayan and one of the leaders of the national investment program “Saudi Vision 2030”, visited Ukraine. Saudi Arabians interested in Ukrainian startups, looking for profitable and innovative areas for investment – read

Salto Advisory connects Ukrainian startups with advisors who have built and scaled successful tech companies such as Ragnar Sass, founder of unicorn Pipedrive, LIFT99co, and investor in 40+ startups, Markus Villig cofounder of Bolt, Kristel Kruustük founder of Testlio and others – read

Global co-founder of IT-product businesses Genesis, together with Facebook, launches StartUp Academy — an international academy for founders of technology startups and their teams from Central and Eastern Europe – read

Interview with Dominique Piotet, CEO of UNIT. City, about the U Tomorrow Summit that will be hold on September 3-4 in Kyiv – read

Interview with CEO and cofounder of Apostera Andrey Golubinskiy, by Michael Buryk for Made in Ukraine Tech Startup Edition – listen

Ragnar Sass, founder of Pipedrive (unicorn), LIFT99co & Salto, and investor in 40+ startups, has put together 24 questions he considers when investing in startups – read

The law of the “Diia City” regime that will create a special legal framework for the IT industry, was signed by President Volodymyr Zelenskyy on August 11. IT companies receive a special taxation model, flexible employment conditions and a special procedure to interact with regulators – read

Deputy Prime Minister/Minister of Digital Transformation Mykhailo Fedorov and his Deputy for IT Development Oleksandr Bornyakov met with Vice President for Government Affairs & Public Policy at Google Karan Bhatia.The conversation revolved around the possibility of optimizing cooperation on the Diia (Action) app and the selection and recommendations of content for the main page of Ukrainian YouTube Music and YouTube – read

In order to promote business development in Ukraine, the Government is introducing a pilot project, thanks to which it will be possible to obtain permits for doing business in one “window” through the Diia portal. It will be possible to pass a procedure of the state registration of business (registration of a sole proprietorship, LLC), register with the tax office (become a single taxpayer or a VAT payer), or obtain various licenses in the Diia Portal. For instance, for retail or wholesale trade in goods. According to Prime Minister Denys Shmyhal, it is planned to introduce a pilot project within 2 years – read

The Government has passed an order that will triple the mandatory list of services in centers of administrative service provision (CASPs). As a result, citizens will be able to receive the necessary services in a single office – read

The Unified State Electronic System for the Construction Sector (USESCS), on the Diia portal, can provide 11 services. These include obtaining a construction permit, a declaration of readiness for the operation of CC1 facilities and the issuance of a construction passport – read

The top trends in tech by McKinsey – read

The Future According To SoftBank – read