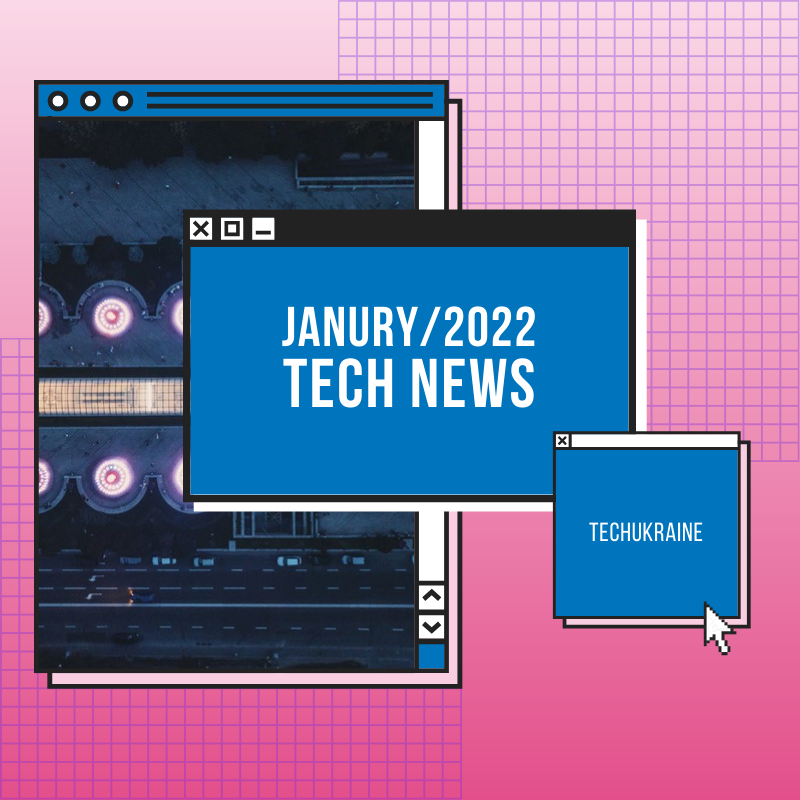 What has happened in the Ukrainian tech market in January 2022?

Qualcomm has recently registered as a legal entity in Ukraine, a representative office in Kyiv and plan to open the R&D center in the country – read

SoftServe opens R&D centers in South America: Mexico, Columbia, and Chile. The first office will launch in Guadalajara, Mexico. The next – Bogota and Medelina, Columbia, and Santiago in Chile – read

Co-Founded by Ukrainian Pavlo Eremenko Universal Hydrogen, the company leading the fight to decarbonize aviation through the adoption of hydrogen as a universal fuel, raised $62 MLN by Mitsubishi Motors HC Capital, Tencent, Stratos, GE Aviation and others – read

Ukrainian Fintech Farm, a newly launched fintech startup based in the U.K. that creates digital banks in emerging markets, has raised $7.4 million in seed funding led by Flyer One Ventures and Solid with participating TA Ventures, Jiji.ng, u.ventures and AVentures Capital – read

BGV Trident Capital, founded by Illia Ponomarev and Hennadiy Butkevych (the co-owner of ATB), has invested $5 million in the robot manufacturing startup Deus Robots, created by Pavlo Pikulin in 2018 – read

JKR Investment Group invested in TRIONIKA, a Ukraine-based global IT company. The amount of the deal is not disclosed – read

Ukrainian SaaS platform for companies in the aviation industry Input Software joins the global Techstars community at the “Cities of the future” accelerator program in Turin, Italy. The company raised $120 000 with an estimate of $3 MLN – read

The Ukrainian venture capital firm TAVentures increased the size of its fund — from $50 million to $75 million. The firm will use the additional $25 million to invest in a new direction — Web3, blockchain, and a metaverse = read

Spanish Impress is acquiring the Ukrainian company OrthoS, resulting in the birth of Orthos Impress. During the next three years, Impress will invest € 10 million in the Ukrainian market: building the clinics, R&D center, treatment planning & production facility – read

IdeaSoft announced the acquisition of Kharkiv-based software and gametech development company PULS Software, which will become Eventyr. One of the main business vectors will be focused on Web 3.0, NFT gaming, and Metaverse vectors, as well as expansion towards the large corporate IT sector – read

Callback Automation Platform for the websites CallPage, an IT startup founded by Ukrainians Ross Knap, Sergey Butko, and Andrey Tkach, has been acquired by SaaS Labs, an American automatized platform providing services to sales and support teams. The amount of the deal is undisclosed – read

Sich-2-30, Ukraine’s fourth satellite, was launched on 13th of January. Elon Musk’s SpaceX launched it into orbit with a Falcon 9 rocket from Cape Canaveral Space Force Station in Florida. The satellite was designed, assembled and tested in Dnipro, Ukraine, at the Pivdenne Design Bureau – read

Ukrainian mission-driven digital fashion company DRESSX is in a Newsweek as one of the America’s greatest disruptor (fifty visionaries, innovators and pioneers who are transforming the world through technology) – read

Ukrainian Delfast Inc. is among the best all-terrain electric bike globally according to Insider – read

Lviv IT cluster in cooperation with USAID Competitive Economy Program in Ukraine launched Lviv Tech, the first B2B platform that connects the Ukrainian IT sector with clients from all over the world – read

Ukrainian greencubator team and CIVITTA in partnership with European Bank for Reconstruction and Development (EBRD) and the European Union in Ukraine has launched the new phase of the Climate Innovation Voucher up to EUR 50,000 to develop climate innovation as part of the FINTECC programme, aimed at increasing SMEs’ competitiveness to develop and implement climate technologies – read

Our partners EASE, European association of software engineering, launched the production of the documentary “The first code”. The film will tell the history of the Ukrainian tech ecosystem at a glance – read

The Ukrainian drug delivery service Liki24, has reached the mark of 1 M customers. The company operates in Ukraine, Poland, Romania, and Hungary – read

Binance has announced the appointment of the General Manager in Ukraine Kyrylo Khomiakov who will be responsible for strengthening the company’s positions in the local market, implementation of the global marketing strategy, and GR – read

Ukrainian UFuture holding company, which develops the Bila Tserkva industrial park, announces changes in its configuration and the finish of the first phase of development: relocate production capacities of the Plank Electrotechnic to partners, and place the German manufacturer of automotive components in its place – read

The next Ukrainian unicorns according to experts point of view: Restream, Effa, Esper Bionics and others – read

How to apply for Diia City residency: Cabinet of Ministries’ guidelines – read

Due to the Diia City, the IT sector growth performance can double to 40-50% per annum, while revenues can grow from USD 6 billion to USD 16.5-17 billion, according to Prime Minister Denys Shmyhal – read

Ukraine is introducing new tools to win a regional competition for investors –  the development of 25 industrial parks countrywide, the potential of which is starting from USD 2.5 billion in additional investments, according to Prime Minister Denys Shmyhal – read

Ukraine over the next few years aims to integrate into European markets by signing so-called visa-free with the EU in the industrial, customs, digital, transport and energy sectors. The introduction of European rules will give the Ukrainian economy additional billions of euros in revenues – read

The Ministry of Digital Transformation is now encouraging people from all over the world to use the digital literacy educational series available in English on the web portal Diia.Digital education – read

Interview with Bogdan Ponomar, one of the initiators of the AI HOUSE Conference and CEO of AI HOUSE, who’s team is responsible for many educational projects in AI and ML fields and creating a solid AI community in Ukraine – read

Interview with Yaroslav Prygara, ex-CEO of SHERP and co-founder of recently launched startup for remote workers Remo that provides high-tech working spaces in the best places around the world – read

Interview with CEO of Digital Learning David Oreshok, a modern educational project for schools that helps transform the computer science lessons into up-to-date IT courses for pupils – read

Interview with Oleksiy Skrypny, ELEKS, one of the most experienced person in the Ukrainian tech industry – read

Mykhailo Rogalskiy talks about rebranding to The Credit Thing the fintech startup Koto from London, launched by monobank founders – read

Salaries of Ukrainian IT specialists by DOU – read

Migration map of IT specialists in Ukraine by DOU – read

The Best 50 employers in Ukraine by Forbes Ukraine and Work.ua – read

The state of SaaS in Japan by One Capital – read

Cryptocurrency and blockchain in Ukraine – read